Where is the Bund going?

ECB’s monetary policy has anchored yields at a low and stable level. As long as this policy remains unchanged, the Bund is to remain in a tight range of -0.65% to -0.35%. On a longer horizon however, a change in ECB’s stance could be associated with more sizeable curve moves as the fundamental value is more elevated, we find it North of 1% in the case of the Bund.

What is the curve telling us?

Monetary policy
The first story is one of a monetary policy that remains extremely lose for an extended period of time. Three-month Euribor contracts are consistent with an increase of a mere 2.5 basis points over the coming two years. US rates are not much better with only a dozen basis increase points over two years. 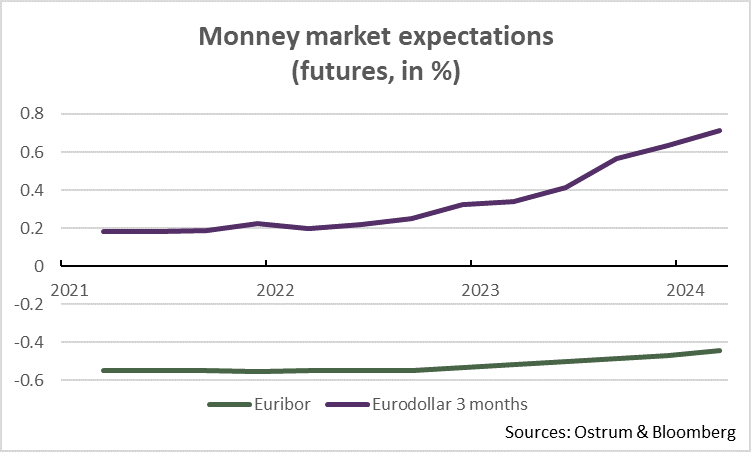 With the ECB’s and Fed’s communications in mind, this should hardly come as a surprise. Still, this is totally at odds with recent history.

Central Banks’ interest rates tend to move with the cycle as demonstrated by the chart above. The Manufacturing ISM is a reliable signal of the Fed Funds movements over the following twelve months. In a « normal » world, with the ISM currently standing at 60.7, one should expect the Fed Funds to gain almost 100 basis points over the coming year.

The market is thus assuming, rightly so we believe, that monetary policy is immune from the cycle for the foreseeable future.

Inflation
The second story is that inflation is not really an issue. It is worth highlighting however that the inflation curve has significantly been reassessed over the past few months. In the USA for instance, last summer the curve was telling us that we would have to wait a decade before seeing inflation returning to 2% Currently, the all inflation curve has migrated back above the 2% mark. As often, the corresponding change in Europe is more tepid. Here too though it is worth noting that the 10-year inflation swaps have moved from 0.8% at the end of Q2 last year to 1.15% now. 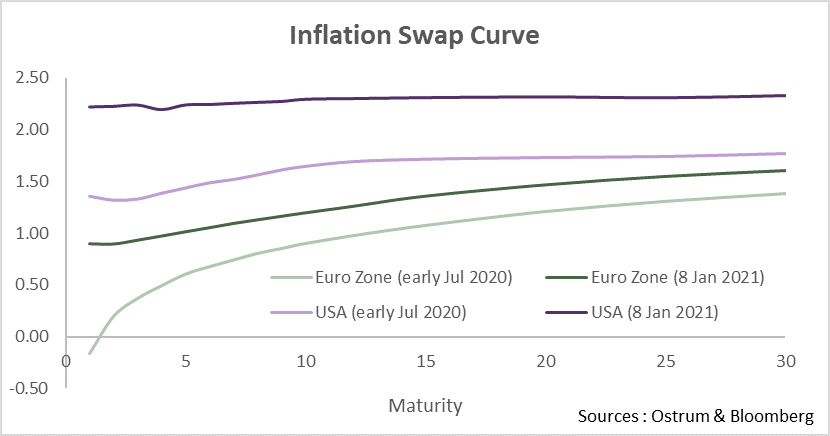 The message sent by the market remains however a Goldilocks one. No deflation Japanese style. This is obviously true in the USA, but to a large extent in the Euro Area since inflation there is expected to trend upward, albeit slowly, and settle in a range between 1% and 1.5%. There’s no risk of overheating either. A perfect scenario for Central Banks that will allow them to keep their very loose monetary policy. This second story on inflation is very consistent with the market’s view that Central Banks will remain pat for long.

We are far from convinced by this nice scenario and believe inflation could prove less well behaved (see our MyStratWeekly from December 7th “The Return of Inflation?”). Our chief economist Philippe Waechter is also of the view that inflation has a potential to surprise on the upside. The market for now, couldn’t care less.

Long rates
Last story, with such a stable environment both in terms of monetary policy and in terms of inflation, it will come as no surprise that the markets expect little variations in long yields. Expectations here too are quite stable indeed. The chart below shows the market expected volatility on the long part of the curve (we use the “swaption vol” to facilitate comparisons between the US and Euro Area). Expected volatility is indeed at historical lows. 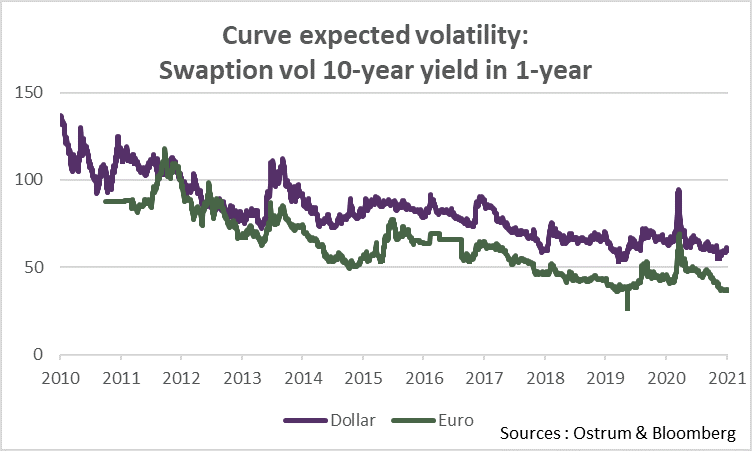 For the anecdote we can note that, with such limited changes, the Bund will not return into positive territory before 2033. In 12 years! The Treasury is also expected to remain in a 100 basis points range for the entire decade. The expected increase in rates is indeed desperately slow. In the case of the Bund, the market expects a -0.09% yield in ten years, a mere 47 basis points gain over the decade. As demonstrated by the chart below, this is one of the lowest expected change over a quarter of a century. 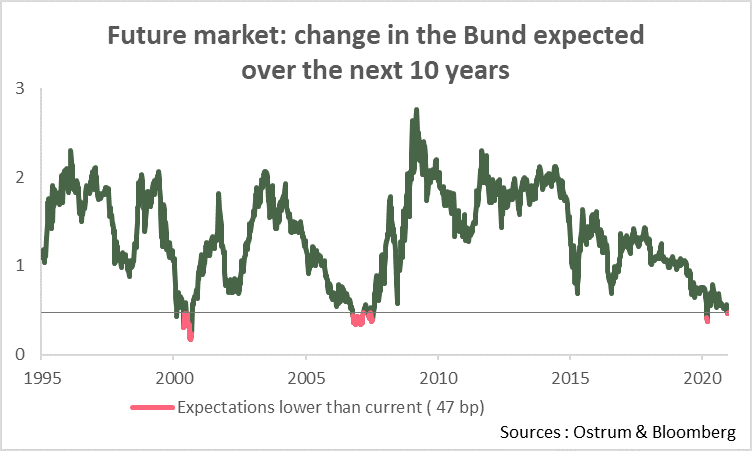 The market is thus expecting quite a calm scenario, with monetary policy on hold for long, inflation that settles at a low level and curves that should not move much. This scenario is very “Zen” and in sharp contrast with the recent history.

The classical approach to estimate the fair value of rates is based on the so called “golden rule”. The idea is that interest rates should converge towards the level of economic growth. In real life this rule has proven to be very accurate as shown in the following chart. 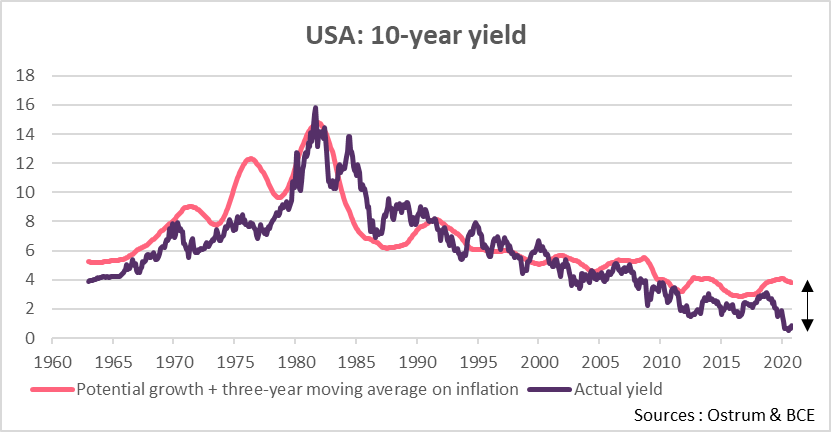 The chart relies on US data as this allows to have a time series spanning more than 60 years. Using OECD data however, we can obtain for the past 30 years results for other countries. The signal is the same as the “golden” has proven quite accurate indeed here too. 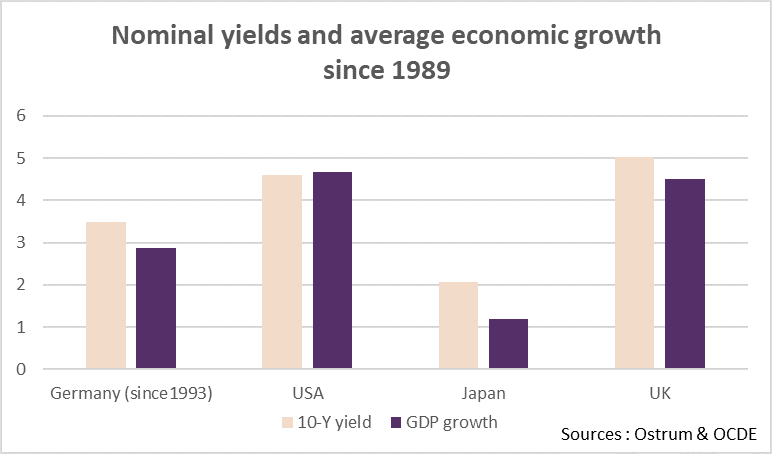 Our fundamental model relies on that philosophy, with added sophistications; in particular we take into account flow of funds via data on Treasury purchases by foreigners and we use an error correction model to capture the short-term dynamic.

Those fundamental fair value might seem far from the truth. In the case of Germany however, a recent ECB study (see https://www.ecb.europa.eu/press/key/date/2019/html/ecb.sp190612_1~1a3bede969.en.html) estimates that the QE has had the effect of driving down yields by about 90 basis points. Taking that into account our fundamental fair value would be closer to -0.50%, which is not that far from what you see on the screen. It is worth noting also that the QE effect wanes only slowly and will take more than 15 years, again according to the ECB’s paper, to disappear.

If the fundamental approach remains relevant, it must be complemented by the effects of the extraordinary loose monetary policy currently implemented.

“The only game in town”

The fundamental approach must be augmented. In particular with monetary policy that put a ceiling on rates. This explains to a large extent the movements of the last quarter in 2020, despite mounting expectations of a recovery on the wake of the vaccine announcements and budgetary policies, rates have hardly moved due to the Central Banks interventions.
To make the point we will swing completely: let aside fundamental information and take into account only monetary policy. Can we have an analysis “soilless” getting rid of fundamentals and focusing exclusively on monetary policy?

A narrow range for the Bund as long as the ECB doesn’t change its monetary policy.

From a purely empirical point of view, the results are satisfactory. Our “soilless” approach is efficient. The average model error is small moreover, and more importantly, the actual yields tend to converge back to the prognosis of the model. To put it differently, the output of the model acts as point of reversion for the actual yields and it thus provides a good guidance for future market moves. 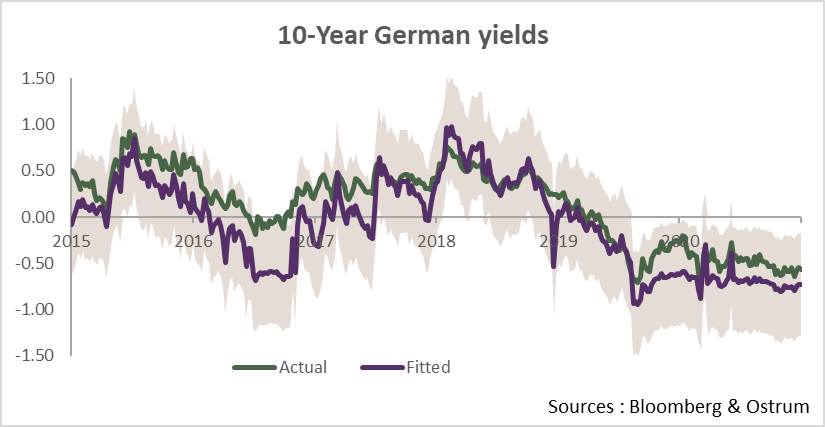 There are several conclusions to be derived from this exercise. First, over the past decade, the information from monetary policy seems to explain almost all the movements in yields. To borrow from El-Erian’s last book title, monetary policy is indeed “The Only Game in Town”.

Second, if we take into account the current shape of the short part of the curve, it is difficult to justify Bund yields moving above -0.3%.

The intuition behind this conclusion is simple: with short rates close to -0.65% and the curve being very flat up to five years, the degree of liberty for the longer maturity is limited. At the risk of being inconsistent, it is unwise to assume a steep curve on the five to ten-year section if the zero to five year is so flat. Hence, as long as the ECB doesn’t change its policy nor its guidance, German yields have to hover around the current prints. 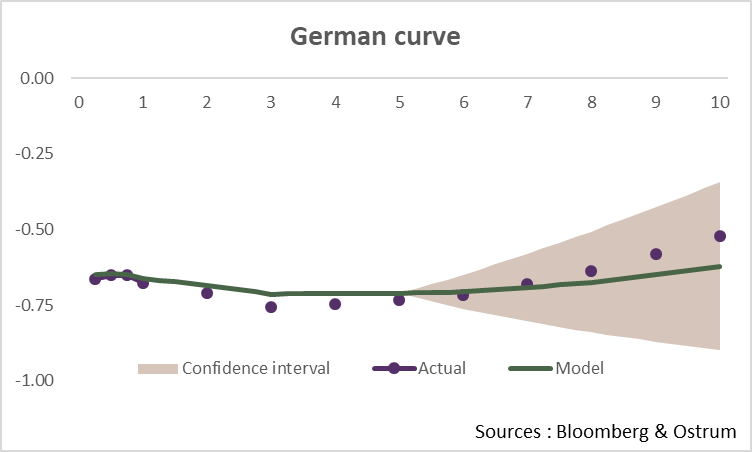 The issue with that approach, though, even if it provides presently the best fit, is that it is a very short-sighted one indeed. It does provide valuable guidance on the range for the Bund and the rest of the curve. But does not allow to draw trend: to the extent that monetary policy is lagging, the economic cycle future changes cannot be analyzed. If the economic cycle was to accelerate or if inflation was to increase, the ECB’s monetary policy would have to adjust, even if, needless to say, this is not an issue in the short term. The first approach, using fundamental approach, would then become fully relevant once again to capture changes.

Conclusion: as long as the ECB doesn’t change…

Short term stability
As long as the ECB doesn’t change its monetary policy, monetary rates will remain where they are and the short part of the curve will remain totally flat. In such a situation, Bund yields should stay in a narrow band.

To be more precise, under current circumstances, we find that the probable range of variation for the Bund is -0.65% to -0.35%, which is not far from what has been the case over the recent past, an increase over that mark seems hard to justify.

We note that the Bund has indeed settled 90% of the time within that range since the beginning of last year. And even more so since the start of the pandemic.

Medium term risks?
Over a longer horizon however, the situation could be more complex with and equilibrium interest rates at a higher level. Even if a monetary policy change is highly unlikely over the near future, the equilibrium level of yield derived from fundamentals is much higher than the current prints.
Moreover, at the time of writing, the scenario expected by the market is particularly benign and could lead to the need for a reassessment. The change could be violent.