Volatility picks up despite ECB easing

The mostly uneventful ECB meeting sparked position unwinding and a volatility spurt across risky asset markets. Bond yields moved lower and higher Crossover spreads do hint at a reduction in risky positioning. The impasse of Brexit negotiations and budget talks in the US entail two difficulties for markets towards year-end as the Fed meets this week.

The main takeaway from the ECB meeting is that monetary policy will remain broadly unchanged. The “temporary” PEPP tool is prolonged until March 2022 and capacity was raised by €500b. As regards bank funding, the three new TLTROs include a rate premium to provide incentives for banks to maintain credit until the end of 2021. The Central Bank appears worried about the possibility of a credit crunch, which would be a payback the extensive use of credit lines by corporate borrowers at the height of the pandemic. The bonus rate (-1%) may postpone TLTRO repayments and reduce covered bond issuance going forward. Furthermore, four unlimited liquidity-providing operations with one-year terms (PELTROs) have been added in 2021. In fact, in money markets, euro area banks no longer have borrowing interest at 3-6 months’ maturities. Monetary inundation reflects prevention of systemic risk. The ECB also tweaked its inflation forecasts lower. Consumer prices may rise by just 1.4% by 2023. In some ways, the lower price projections, in conjunction with additional easing, may simply reflect that the ECB is powerless. In parallel, Germany brokered a compromise deal with Hungary and Poland which had vetoed the EU budget including the €750b recovery plan. Talks between the UK and the European Union have however stalled again. A no-deal outcome appears indeed inevitable at this juncture.

In this context, the FOMC meeting will take place on Tuesday and Wednesday whilst, at this time, there is no budget agreement. A continuation resolution has been signed and talks may continue for up to 7 days. Steven Mnuchin’s $916b proposal has similarities with the House’s bipartisan plan. Republican leaders in the Senate still oppose parts of the budget bill including financing of states. Time is running out as federal unemployment insurance will expire at year end. The Fed may leave its monetary policy unchanged. The zero-rate policy until 2023 will likely be confirmed as economic projections are updated. Asset purchases will be unchanged at around $120b a month as mortgage credit demand and higher house prices arguably reduce the chances of Operation twist in the near term.
Monetary status quo contributed to the bid for risk assets as equity markets went through a soft patch late last week. Recent steepening makes carry trades on US treasuries more attractive especially some investors bet on Fed twist. Activity in futures markets report buying along the yield curve leading to renewed flattening pressure late last week. The yield on 30-year T-bond lost some 12bp to 1.62% at last week’s close. The 2s10s spread shrunk by 4bp to 77bp. The yield on 10-year note dipped temporarily back below 0.90%. In the euro area, the markets’ knee-jerk reaction to ECB announcements was swiftly erased. The yield on 10-year Bunds closed last week near -0.63%. On short-term maturities, some investors had anticipated an increase in the reserve multiple for which bank liquidity holdings are sheltered from negative rates. As tiering multiples stayed unchanged, position unwinding sent 2-year swap spreads about 3bp wider. Sovereign spreads barely budged. The spread sold 10-year bond for the first time. Italian BTPs still trade below 120bp.

Credit spreads have broadly unchanged over the past week on both sides of the Atlantic. The Euro IG credit market is stable about 93bp against Bunds despite the accumulation of selling final investor flows. ECB buying is enough to maintain market spreads in equilibrium. Conversely, iTraxx crossover spreads (264bp high last Friday) increased in response to higher equity volatility. The spread correction suggests that high yield valuations are rich at present as, on our estimates, as spreads barely compensate investors for expected defaults on corporate credit.
As regards equities, the FTC’s antitrust case against Facebook sparked a sharp correction in the Nasdaq. This is a stark reminder of potential risks weighing on big technology companies under a Biden Administration. That said, IPO success namely AirBnB or DoorDash only highlight the importance of liquidity still to be invested. The beauty contest instantly sent AirBnB’s valuations above $100b. In Europe, the fallback in bank stocks reflect disappointment as regards their ability to pay out dividends next year. The regulator is unlikely to allow a sharp increase in shareholder returns, at a time when monetary policy is being eased. In currency markets, the downtrend in the US dollar continues with the DXY index sliding towards 90 and sterling volatility is here to stay as Brexit headlines move markets. It is fair to say that additional ECB easing had little effect on the euro which keeps trading above 1.21$. 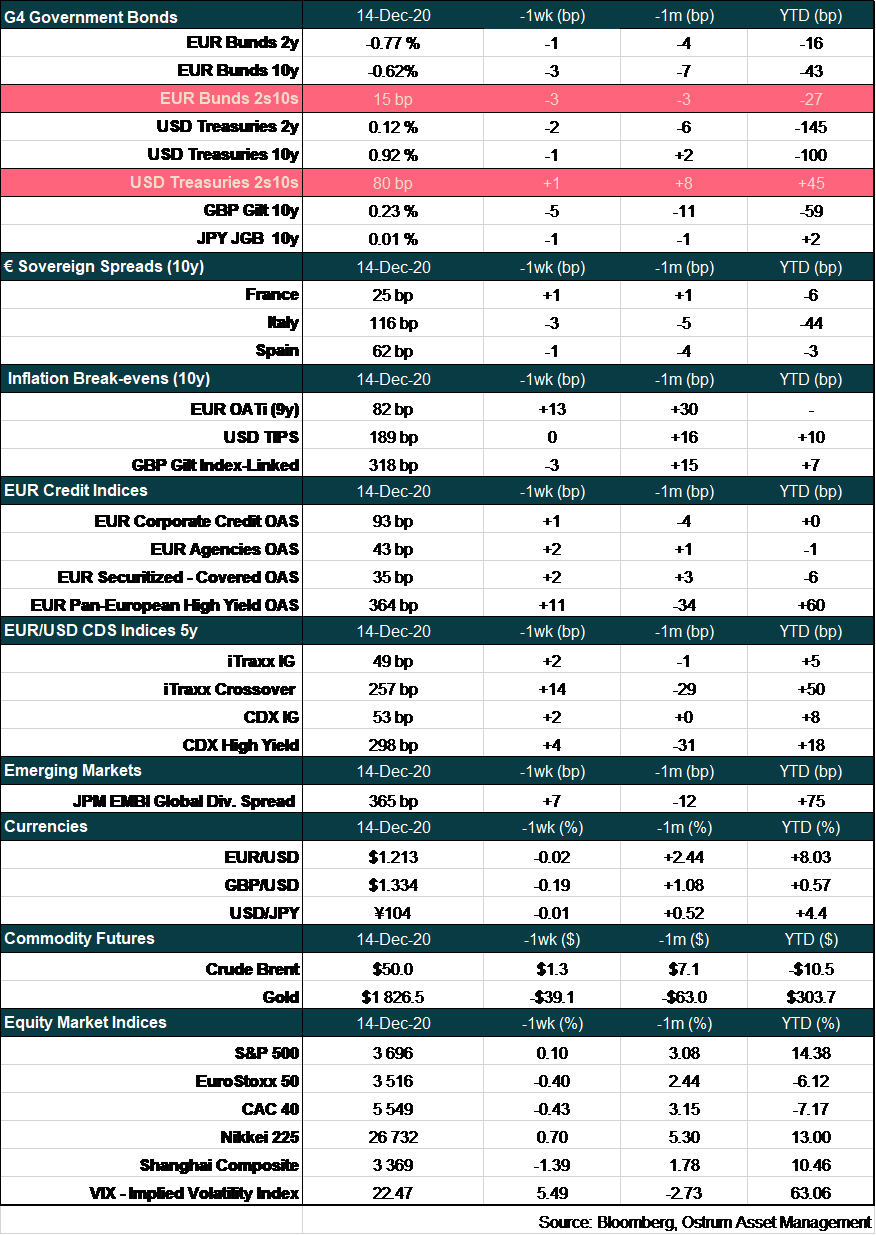