Stocks are too expensive? Really?

It is undisputable that stock market valuations are very stretched when compared to historical standards. Taking into account the level of risk-free rates, the conclusion has to be much more nuanced in comparison, the equity risk premium is unusually generous. Moreover, high valuations are not necessary the sign of a forthcoming correction, they are a risk when combined with profits being also largely above trend. This is not currently the case.

Let’s start with the obvious. The current stock market valuations, when compared to historical standards, are very high.

This is the case in a large number of regions. In the below chart we show three stock markets: Europe, USA and the world. In order to make the various valuation metrics comparable, we show the percentiles. A number of these metrics are in the top percentile, i.e. they are simply at historical highs. Most of the remaining ones are also in the neighborhood of their previous highs. 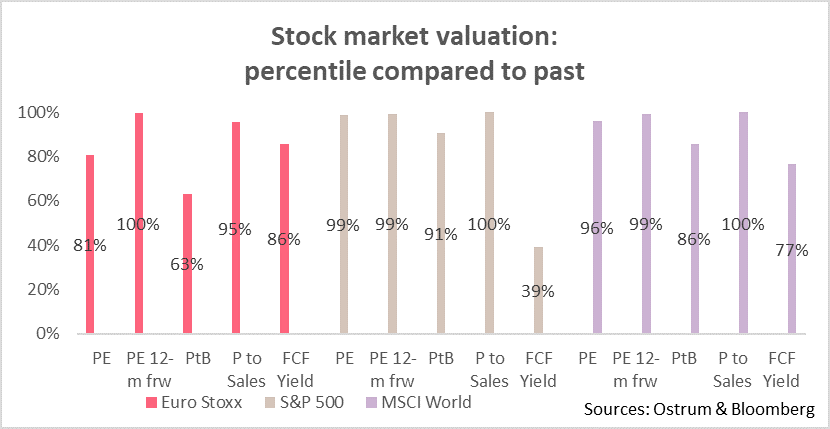 Part of these findings could be attributed to the fact that profit have been depleted by the covid crisis and would thus be more relevant to use trend-adjusted profits. This is exactly what the “Shiller PE” does, using cyclically adjusted earnings after adjusting for inflation, hence his other name the “CAPE” for “Cyclically Adjusted PE”. As shown in the below chart this actually does not change significantly the conclusion. Even when this normalization is used, markets appear to be quite expensive. 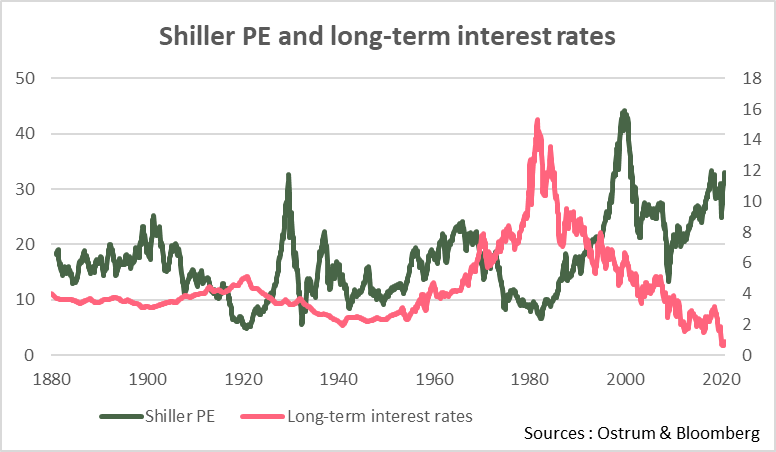 End of the story: from an historical perspective the stock market is indisputably expensive.

It is worth highlighting that those high valuations of the market as a whole come with valuations dispersion that are equally high. If we use the MSCI Euro Zone index for instance the growth stocks command a premium of nearly 60% compared to the rest of the market. Less spectacular in the USA, the premium is nevertheless a lofty 40%. In both cases those numbers are very close to historical highs.

The concentration of the US market and the fact that the performance has been driven by a handful of stocks, notably tech stocks, has attracted a lot of comments. Some of those stocks are indeed trading on impressive multiples. The chart below shows that, if the pattern is different, Europe is not immune from this divergence of performance. Far from it as valuation spreads are extreme. 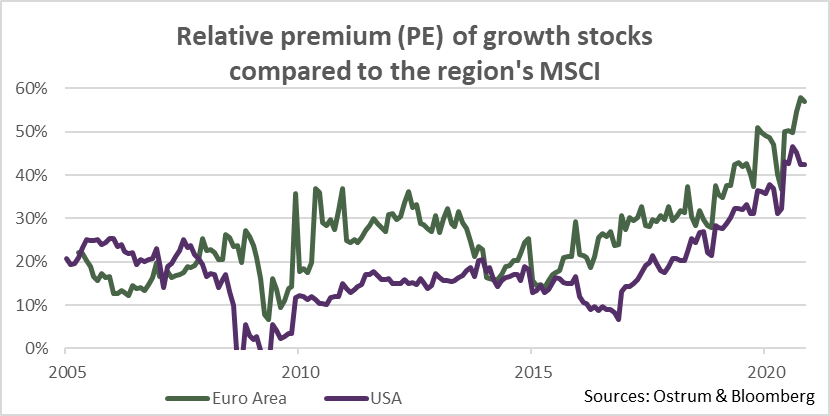 Hence the problem is not only the fact that stock market indices are expensive, but also the fact that part of the market has even more extreme multiples.

If most valuation metrics are stretched, the equity risk premium (i.e. valuation compared to interest rates) sends a different signal. On a relative basis, stocks are not that expensive at all.

This, obviously, owes much to the level of the risk-free rate which provides a basis for comparison that makes stocks prices look favorable. Stocks are expensive, but compared to an even more expensive asset class, the risk-free rate, they look comparatively pretty. This is the TINA argument “There Is No Alternative”. It is a “bad student” argument, stocks are too expensive, but we find an even worse asset class to compare with. This would hardly be a convincing argument for an investor.

There’s another argument though, and a better one we believe. Equity market valuations must adjust to the lower yield environment as it will influence the discounting factor that will be used in pricing futures flows received by a stock market investor. The accrual value of these flows should be higher with lower rates, hence justifying equally higher valuations. On that vein, the Banque de France, an institution unlikely to show much complacency about speculative bubbles, has shown in a recent paper that the level of PE are justified if the decline in risk free rate is taken into account: « What are the factors behind current high stock market valuations? » https://blocnotesdeleco.banque-france.fr/en/blog-entry/what-are-factors-behind-current-high-stock-market-valuations

To illustrate this argument, we compare in the following chart the dividend yield and the average credit yield at several levels of rating. 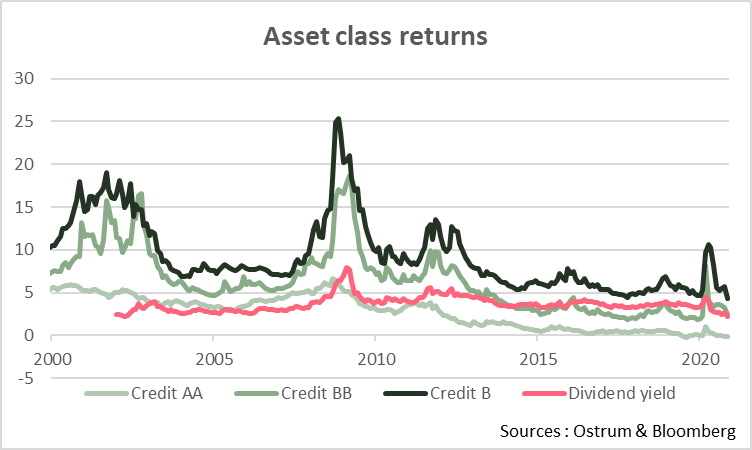 During the last decade and until 2009, the dividend yield was hovering about AA yields. Since 2014, it has moved closer to a BB. At the end of 2019 it was closer to a single-B and when dividend yields stabilize to a post-covid level it is likely to return to a yield akin to single-B. As a consequence, to

obtain a return equivalent in the credit market investors have to take on more risk and go down the credit curve.

Let’s go back to the Shiller PE, often quoted as a proof that markets are too rich. However, the chart below, also drawn from the Shiller’s data base, tells us a very different story. The intuition behind the Shiller PE is that high valuations signal forthcoming lower returns, and conversely. This ratio has indeed become famous as it led Shiller to correctly forecast the bursting of the dot-com bubble in 2001.

However, what really matters in terms of signal for future performance is not really the absolute level of the Shiller PE but its relative price compared to the risk free rate. This is the point of the series computed in the chart below: in Shiller’s terms it’s called the “Excess CAPE Yield” as it is the difference between the CAPE yield (simply the inverse of the CAPE) and the long term real yield. This takes us back to the equity risk premium which, according to the below numbers, is close to its long-term average. Conclusion: the stock market retains a potential for positive performance, the order of magnitude is 5% per annum over the coming decade. 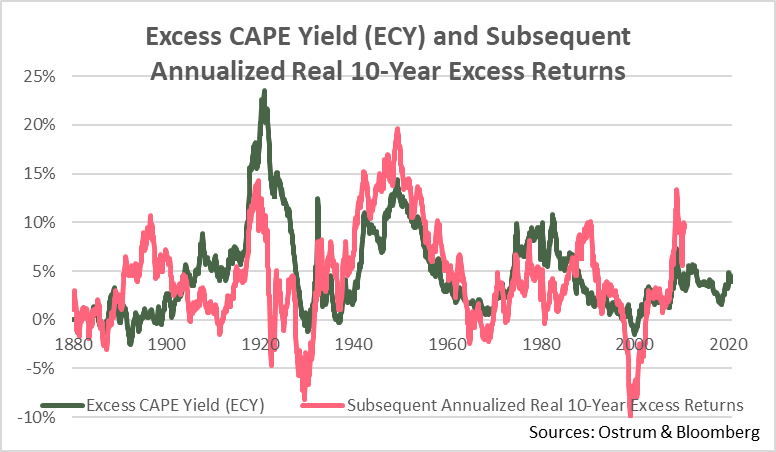 This, we believe, is the core of the debate. Absolute valuations are indisputably very stretched. But relative valuation, when low risk-free rate is taken into account, are justifiable or even reasonable.
An argument that holds, obviously, only as long as rates remain at their current level. It is fair to say however that the risks appear to be asymmetric: while we can plausibly imagine scenarios where valuations drop significantly, on the contrary a scenario with a further sharp increase is difficult to imagine.

By the way, is that really an issue?

There’s much talk about supposedly high valuation because the intuition is that a market with high valuations is bound to correct at some point in the future.

Below we use the S&P data that allow us to go back to 1954. The chart below shows, depending on the initial level of the market’s PE, what has been the probability of a bull market of the following 12 months. When the PE is above 22.5, the historical probability of having a bull market is desperately close to 50% Valuation have a predictive power equivalent to that of a coin tossing. 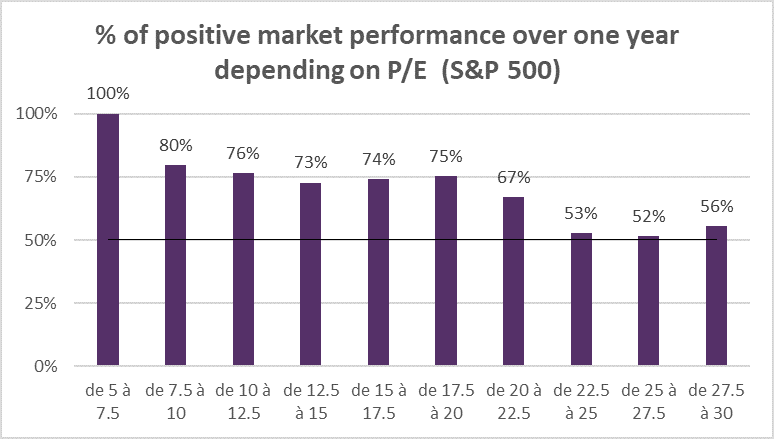 One might object that, when valuations are high, corrections can be large while bull markets are much more limited. A very fair point, alas data again are against that intuition. With high PE the historical return of the stock market 12 months hence is basically zero. 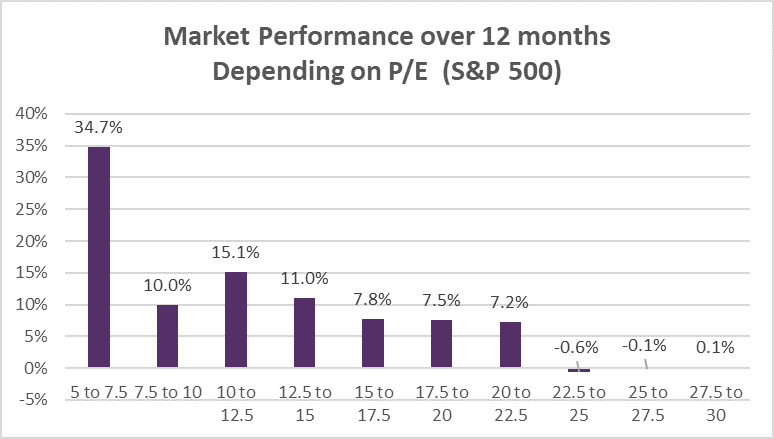 The conclusion is straightforward: when PE are very low, they send a very reliable signal of future performances. In that case the market is quite likely to enter a bull rally. However, when valuations are very high, the relevance of the signal is simply appalling.

This result does not satisfy us, a 50/50 signal is hardly useful for the investor. So, we tried harder, and used a more sophisticated approach, using a partition algorithm, with the idea to find the conditions that lead to a market correction.

The conclusion can be found in the decision tree below. And the findings are instructive: the danger zone, from an historical perspective, is when the markets’ PE exceeds 16,2. Passed that point, the market return over the following 12 months has been on average 6.0% and the market has been up 76% of the time. But there is a sharp contrast when the level of corporate profits is also elevated: a PE above 16.2 associated with profits 18.6% above their long-term trend form a very nasty cocktail indeed. When it has been in that configuration, the market has lost on average 11.9% the following 12 months and it has been up only 15% of the time.

Meanwhile, the same stretched valuation while profits are close or below their long-term average, leads to a far less anxiogenic situation. That configuration has led to positive returns 76% of the time with an average performance of 8.6%. 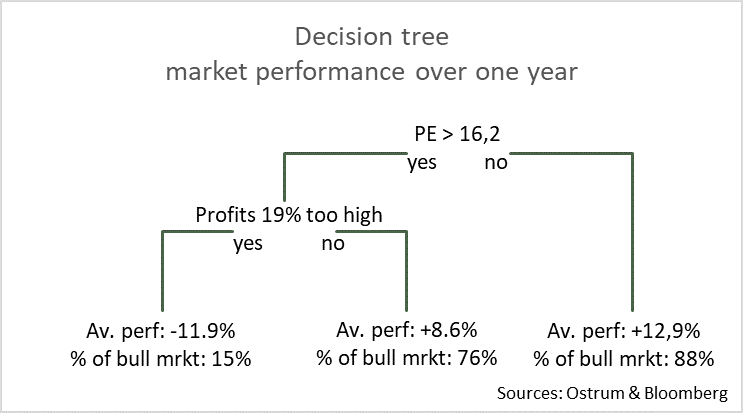 If the current situation is indisputably one of stretched valuation, it is also one profits being comfortably sub-trend. In the past this situation has tended to be supportive of stock price returns.

The finding is obvious, valuations are very stretched, or even indeed at their all-time high. At the same time, the level of profits is clearly below of its long-term trend, courtesy of the covid crisis. One can imagine a normalization through a decline in those valuation, but one can as well imagine that profits will return closer to their trend, even if this later solution would not be sufficient to drive multiples back down to their long-term average.

One can also imagine that no normalization of valuation is needed. With the current low risk-free rate, valuations are pushed up by the search for yield but also by the mechanical impact on the discount factor. If that was to be true, the stock market could have a nice run in the future.