Despite $1.9Tstimulus plan announced by Biden, T-note yields drifted below 1.10%. In Italy, Renzi pulled his support to the Conte government though BTP widening pressure remained muted. Credit underperformed in the wake of profit taking in equity space.

Just days before his inauguration, Joe Biden communicated an economic relief program. The announced measures total $1.9T but the complexity of the US budget process and the acrimonious political climate in Washington cast doubt on the size of the effective plan. Funding for vaccines, income transfers to US households and federal unemployment insurance (raised to $400 a week until September) may get broad support from lawmakers. However, state and local government bailouts worth $350b are unlikely to pass the Senate. In turn, tax hikes, included in Joe Biden’s platform, have been left aside. Tax hikes may come next year at the earliest. In addition, infrastructure spending linked to the fight against climate change will be postponed. Lockdown linked to the epidemic resulted in rising initial jobless claims last week. Retail sales ended year 2020 on a softer note despite higher car sales.
In the euro area, political risk is back. Matteo Renzi pulled its support from the Conte government criticizing the planned use of European funds. The Italia Viva leader floated the idea of an ESM loan to fund an increase in healthcare spending. The Italian center-left will try to avoid early elections, which would likely turn in favor of Salvini’s right-wing Lega. In parallel, the Dutch government resigned following a scandal linked to social transfers.
T-note yields spiked to 1.18% early on last week until the 10-year bond auction sparked a trend reversal in markets. The yield on US benchmark notes traded down to 1.09% at weekly close. The bearish consensus, magnified by speculative short futures positions at the back end, proved misplaced as Jerome Powell ruled out tapering asset purchases in the near term. Fed policy support will adjust to future Federal borrowing needs. The quarterly refunding announcement of the US Treasury will be of importance given the size of maturing treasury bills in the months ahead. Yield curve flattening also responded to weaker equities at the end of last week.
In the wake of the US markets, Bund yields traded as high as -0,46%before drifting lower to a -0,55% close. The political backdrop sparked short-lived tensions in BTP spreads (122bp high) though a lack of attractive alternatives to Italian bonds and the possibility of ESM loans worth as much as 2pp of GDP at mid-swap plus 10bp may limit the upside on spreads. Nevertheless, relative richness in BTP spreads could point to spreads rising to a 130-140bp range in the near term. Spain’s 10-year Bono syndication was let with large demand albeit the order book shrank after a revised spread guidance. Competition among bond issuers may have forced enhanced selectivity on the part of investors lately.
As concerns euro IG credit, spreads (91bp) widened by 4bp last week. Primary market activity 514b issued last week) slowed last week, yet 2021 issuance is 60% higher so far than the same period last year. The non-financial sector is overrepresented whilst senior financial debt deals have diminished. The latest ECB measures, including the 1-year extension of the TLTRO bonus rate scheme, may contribute to a reduction in banks’ market borrowing. Similarly, bank interests in euro area money markets are very limited at present so that Euribor 12 months rates now trade below the ECB’s deposit rate (-0,50%). Final credit fund flows have bounced from profit-taking outflows in 4q20.
The European high yield market went through a soft patch last Tuesday, amid increased selling pressure in the BB-rated group. Richness in the latest bond issues did weigh on secondary market quotes. Furthermore, the auction of defaulted Europcar bonds failed. Deliverable bonds were unavailable so that recovery rates shot up to 100% leaving protection buyers with 0%. It is worth noting that iTraxx Crossover (+17bp) is wider so far in 2021 whilst the cash high yield bond market tightened modestly (-6pb).
In equity markets, solid US bank earnings did not prevent a pullback in equity indices late last week ahead of MLK day. Banks take back part of loan-loss provisions accumulated through the pandemic. That said, utilities outperformed the most as cyclical sectors took a hit from a surprisingly strong dollar. The expiration of equity derivatives likely exacerbated the move lower on Friday.
In Europe, the Euro Stoxx lost 0,7% in five trading days. Technology and health care are the only two sectors with positive performances. The decline in the euro cushion the downside for European equities. That said, EPS forecasts for 40% growth in 2021 appear quite optimistic given the latest economic developments. 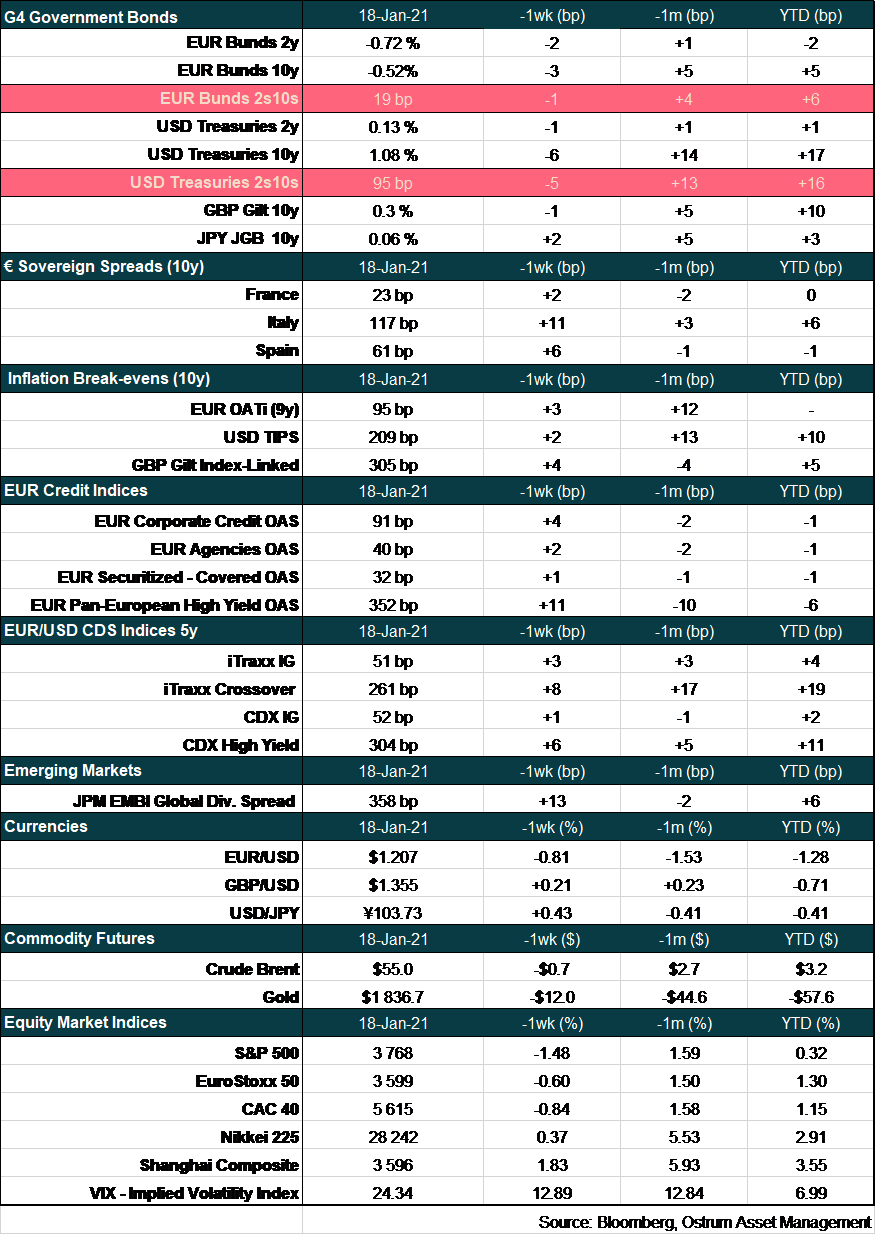