The Italian crisis and the pullback in activity weigh on European markets contrary to the US where the S&P 500 hits record highs.

The reflation investment theme keeps driving market returns. The inauguration of Joe Biden as 46th President and his proposed $1.9T fiscal package have boosted recovery hopes and raised inflation expectations in 2021. In this context, monetary authorities seemingly turned more upbeat on the outlook. The ECB argued that PEPP may be reviewed in a symmetrical manner depending on the economic situation. The Bank of Canada pointed out that C$4b worth of asset purchases on a weekly basis already represents significant support to activity. In Norway, Norges Bank signaled a rate hike next year. The RBNZ now observe higher housing prices in the wake of monetary easing.

Christine Lagarde also responded to speculations regarding the underlying objective of monetary policy. The ECB is aiming at controlling spreads. That said, the ECB does not want to be seen as a daily market regulator at a time when Italian politics are back to haunt financial markets. Giuseppe Conte won confidence votes in both chambers of Parliament and passed a fiscal bill worth €32b voted last Wednesday but a fragile coalition, stretched to include Forza Italia, may result in early elections. The ECB keeps, in any case, a considerable impact on financial markets. The Central Bank may purchase €360 on our estimates in excess of expected net bond supply in 2021. The ECB will not hesitate to expand purchases at any time should the economic downturn, observable in incoming surveys, impact financial conditions negatively. The service sector downturn points to GDP contraction in the three months to March. Thus, the ECB will iron out volatility stemming from the see-saw growth pattern and tightening bank credit conditions.

In the US, Janet Yellen’s Senate confirmation hearing for Treasury Secretary was an occasion to argue for pro-active fiscal policy. The meager democratic majority in US Congress and the complexity of US fiscal policy process will make the adoption of full $1.9T package uncertain. That said, the US economic situation is much better than in the euro area. Surveys indicate strong growth ahead whilst employment weakness appears traceable only to sectors faced with sanitary restrictions. Residential construction is strongest since the mid-2000s. The housing backdrop does raise the issue of Fed MBS buying worth $40b per month, even though the Fed is unlikely to alter policy at this juncture and will continue to fund the lion’s share of the US federal deficit.

In bond markets, the accumulation of speculative long positioning after the 10-year bond auction early on in January draws a resistance about 1.15% on T-notes. That said, there are still significant shorts to cover on intermediate maturities (5 years) so that 5s10s steepening may have legs. The TIPS auction was met with solid demand confirming buying flows observed in the run-up in crude prices. OPEC supply in the short term entails significant support to breakeven inflation rates. The 10-year inflation swap rate is trading about 2.30%.

In the euro area, Christine Lagarde’s communication sparked selling in Bund markets. The yield on 10-year bonds rose 3bp last Thursday amid broad-based steepening pressure, which may spur final investor buying interest. Bund yields closed last week at -0.51%. France sold a 50-year bond attracting un-heard of demand worth €75b. Italian BTPs reflect political risk as spreads widen on speculative flows. As BTP Apr31 traded at 0.75% yields at weekly close, Moody’s issued a statement pointing out the risk of misusing European subsidies. The rise in Italian spreads caused upward pressure on Iberian debt spreads. Meanwhile, Greece made a private placement of 30-year bonds worth €2b with two local banks in need for ECB collateral. The transaction will not affect the annual financing program according to the Greek debt agency.

As regards equity markets, the S&P index (+1.5%) make record highs driven by FANG weekly advance (+6.3%). On a sector basis, energy declined on the back of rumors of a fracking ban in the US, which would greatly impact the US shale oil industry. Europe underperformed due to renewed lockdown risk. Stocks that area most sensitive to economic reopening took a nosedive (-3%). Banks closed last week on a negative note. Corporate earnings have beaten expectations. China exposure and the digitalization investment theme continue to drive equity market returns. Lastly, strong demand for semiconductors underpin the sector’s performance. 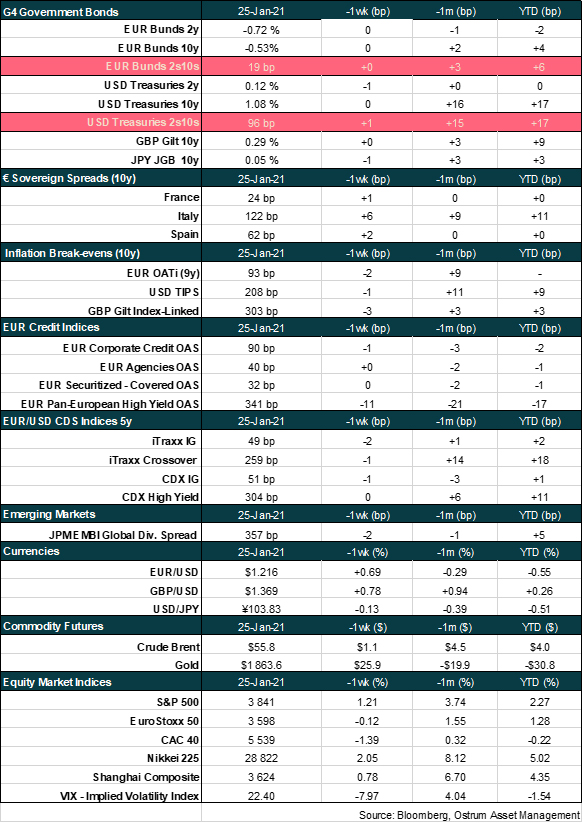