Expansionary monetary policy propped up world equities to new highs. It is now time to consolidate the nascent economic recovery thanks to vaccination whilst dodging political hurdles in the US.

The year 2020 brought about considerable change in our economies. The human cost of the pandemic is very significant with a global death toll surpassing 1.8mn. The Covid pandemic only accelerated ongoing structural changes in economies. It also revealed the fragility of service economies when transport come to a halt.
The year 2020 nevertheless ended on a positive note. An agreement has been reached between the UK and the European Union which finally puts an end to 4 and a half years of uncertainty. While the agreement leaves many gray areas, tariffs and quotas in goods trade have been avoided. UK exit from the common market will not be frictionless as different regulatory frameworks will result in non-tariff trade barriers. The financial sector situation still must be clarified. Clearing houses located in the UK will continue to be used for the next 18 months but UK banks will lose their passport and will no longer be able to sell financial products in EU countries unless equivalences are awarded on a case by case basis. In parallel, major bilateral (EU-Japan for instance) or multilateral (RCEP) trade agreements were signed last year. These deals have capped a period of 4 years marked by continued trade conflicts initiated by the Trump Administration. In the US, political transition is far from smooth. Yet change in the White House opens new opportunities in terms of fight against climate change and the reaffirmation of a multipolar world. That said, Georgia senate elections will be determinant to gauge the ability of the incoming Biden Administration to roll out its fiscal program. The vote takes place after a 900b fiscal bill was greed in December but Senate Republicans’ opposition to increased transfers payments to households is only the first glimpse at partisan battles of 2021, chief among them the debt ceiling debate. The growth profile may be choppy in the first part of the year so that accommodative economic policy remains warranted. The sustainability of the economic recovery in the hardest-hit sectors, most notably transport, will also depend crucially on success of the vaccination effort currently being implemented.
Financial performance in 2020 have been opposite to global economic growth outcome. Risk paid off nicely thanks to continued liquidity injections by central banks. Monetary authorities grew their balance sheets considerably.

The ECB increased asset purchases and lent out unheard amounts to the banking sector. In the US, the Fed swiftly cut rates to 0 % and maid support to a broad range of fixed income markets. Quantitative easing programs have mushroomed including in emerging markets.
In equity markets, sectoral rotation have favored online consumption and technology, which is a clear winner in the shift towards work from home. The FANG stock index which comprises big technology names more than doubled in 2020 pulling broad equity benchmarks higher. Extreme concentration of equity performance may however turn out to be a source of fragility going forward. Conversely, sectors linked to transport and leisure plunged last spring leading a collapse in oil demand. At the panic climax, crude oil prices even turned negative due to excess supply and a lack of coordination among OPEC producers. Discipline came back and Brent prices closed the year at $52 a barrel. Energy underperformed the most last year along with European banks. Restrictions to dividend payments and low interest rates have weighed on bank stocks. Consolidation across the European banking sector is nevertheless underway, most notably in Spain. Furthermore, it’s worth noting that equities are again off to a strong start in 2021.
In bond markets, the ECB’s market presence contributed to curve flattening in euro bond markets. The yield on 30-year Bund declined by fully 51bp last year to close in negative territory (-0.16 %). PEPP buying impacted sovereign spreads significantly as BTP spreads declined to about 115bp at present. Sovereign spreads no longer make economic sense but the outlook for monetary policy suggests the trend for narrower spreads is here to stay. We will be watching bond syndications this January, which may start by an Irish bond deal.
Credit markets also richened despite declining final investor demand. Euro IG spreads reverted to early 2020 levels (92bp) despite supply deluge during the crisis. ECB action spur reach for yield forcing investors into high yield. Compression is indeed a big investment theme. BB-rated bonds offer no more than 2 % but corporate cash holdings and economic growth expectations suggest tail events will be avoided.
Lastly, the downtrend in the US dollar is getting traction. The distrust in the greenback is a reason for sharply rising prices of alternatives to the dollar, namely bitcoin and gold. Bitcoin indeed quadrupled in 2020 and Gold gained 24 %. 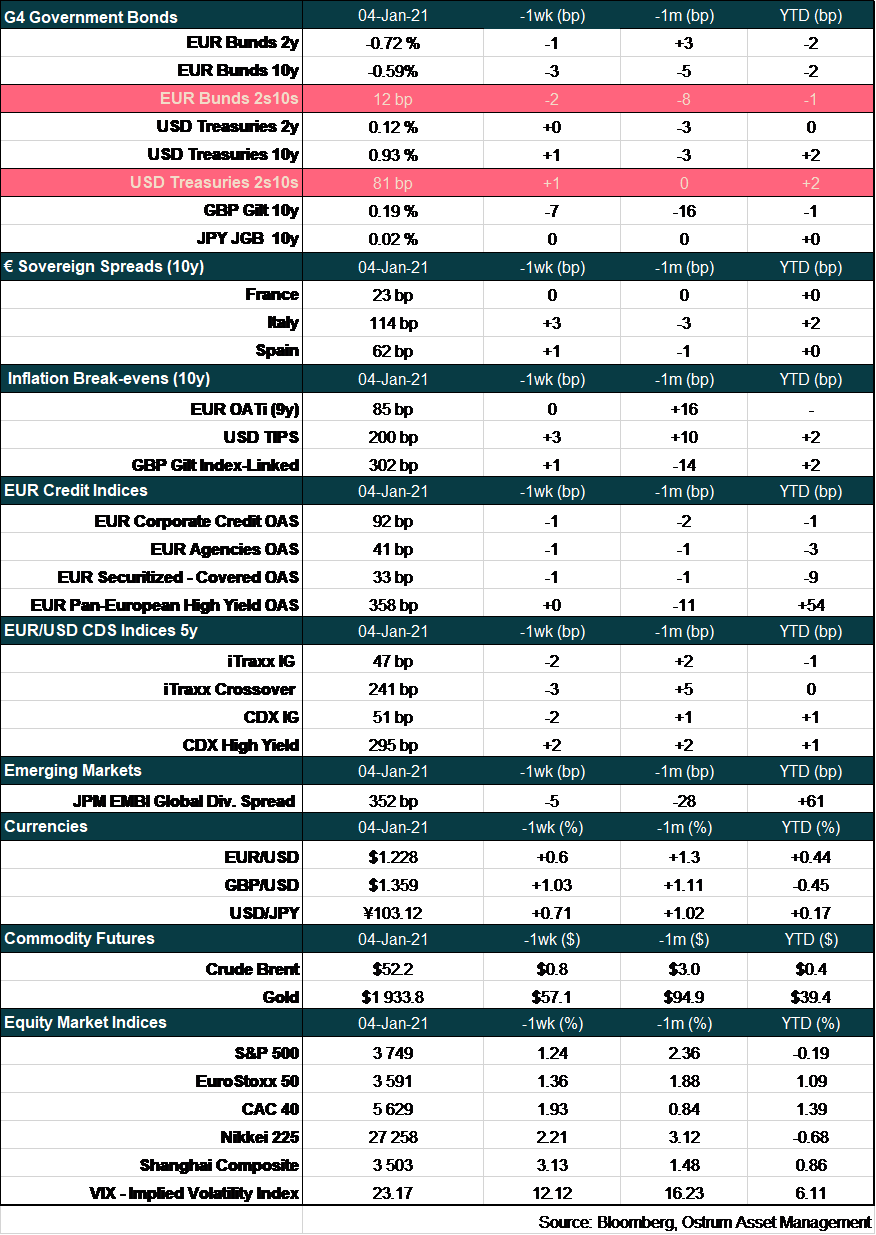