The ECB unsurprisingly left its monetary policy unchanged. However, its communication on the euro exchange rate sparked a bout of volatility (one figure intraday) during the press conference. In parallel, Brexit negotiation impasse weighed on sterling, which dipped to $1.28.
Nasdaq extended losses falling by more than 4% in 4 trading sessions. The pullback in US technology stocks cut the outperformance of US stocks vs. Europe, where most major indices posted modest gains last week. Bund yields drifted lower to -0.50%. Curve flattening had little bearing on sovereign spreads. Iberian debt spreads indeed narrowed by 4bp. European credit was stable at 115bp spreads over Bunds thanks to cyclical sectors but high yield continues to benefit from reach-for-yield flows.
In the US, T-note yields hover about 0.65% ahead of the FOMC meeting. US corporate credit widened slightly in the wake of lower equity indices. Lower WTI prices ($38) took a toll on US high yield. Emerging debt in USD kept rallying (402bp over US Treasuries). 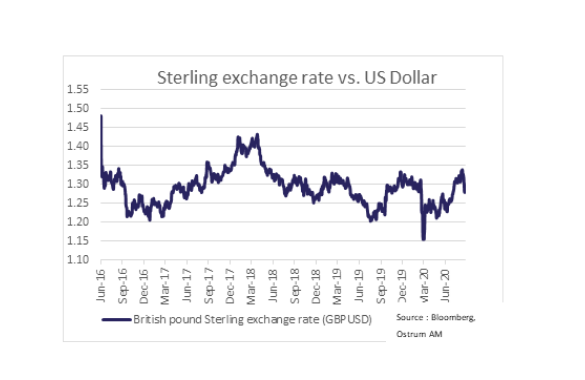 Sterling volatility has been a constant since the June 2016 referendum.
The consequences of a UK exit from the EU never were fully evaluated on the UK side. What is worse, with Brexit deal deadline looming in October, the UK government presented Parliament with a law denouncing the 2019 transition agreement. International credibility of the UK may be at stakes as Sterling takes a nosedive to $1.28. British pound could fall to 2019 lows of $1.20.

The recent appreciation of the euro beyond the $1.20 threshold had induced comments from ECB economist Philip Lane pointing to downside risk on euro area inflation. That said, Christine Lagarde‘s address was more ambiguous as regards currency levels reminding market participants that exchange rate was not in the ECB mandate. In any case, the euro recorded significant intraday volatility (one figure range) during the press conference last Thursday. On conventional real effective exchange rate gauges, the euro appears in line with long-run averages, so that current valuations may not have a disproportionate impact on economic equilibrium. Currency gyrations do have a temporary impact on import prices but the inflation objective is defined over the medium term. Philip Lane’s arguments are therefore somewhat misplaced. The upcoming release of the euro area August HICP will be informative of domestic price pressures and service inflation in particular over the summer period. Furthermore, the most effective ECB tool to deal with the exchange rate may be short-term interest rates. A reduction in the deposit rate would weigh on bank profitability, which would be unwelcome at a time when sector consolidation appears to be gaining traction in Spain. Economic forecasts will be published after final estimates of 2Q20 GDP but the communiqué indicates that pandemic emergency bond purchases may now be linked to the inflation outlook. The change in the text may hint at a prolongation of PEPP beyond 2021. In addition, there is a risk that the EU recovery fund may not be implemented efficiently and there should be no place for complacency. Monetary accommodation only makes sense if fiscal stimulus is efficiently deployed.

The Fed and a fiscal impasse

The Jackson Hole announcements have set the stage for the next 5 years. Jerome Powell must now design monetary policy in a context of increased Fed tolerance for inflation running above the 2% goal. Congress appears to be nowhere near a phase-IV stimulus bill. A mini fiscal cliff could damage the unfolding economic recovery. The political backdrop is unhelpful to say the least. The possibility of another government shutdown starting in October may be non-zero probability event. In turn the Fed is likely to indicate that rates will be kept at zero until 2023. It would be interesting to hear the Fed on corporate credit purchases which only total $44.8b as at September 11th. The monetary institution just expanded the list of eligible counterparties in a bid to trade more extensively with final investors. Low bond inventories held by banks may have reduced the ability of the Fed to deploy capital. In additional, outflows from prime money market funds (invested in short-term credit securities) have accelerated since mid-August. It will be important to monitor BOR-OIS basis spreads to gauge short-term liquidity risk.

Nasdaq volatility continues to be supportive of Treasury bond markets all the more so that Fed policy anchors yields within 0.25% up to 4-year maturities. There is still some steepening pressure beyond 5 years though. The yield on 10-year notes has been trading in 0.5-0.75% range in the past 3 months. The lengthening of Treasury bond issuance and the beginning of a normalization in inflation (1.3%y in August) continue to fan short interest at the back-end of the curve. Ten-year inflation breakevens have nevertheless declined due to T-note buying. Meanwhile, the yield on 10-year Bunds fell towards -0.50%. Technical points on Bund yields indicate a broad neutrality range between -0.37% and   -0.55%. It seems that possible prolongation of the PEPP scheme, now dependent on the inflation outlook, may be announced by March 2021 at the latest. The policy outlook keeps a lid on peripheral sovereign spreads. In turn, swap spreads are trading sideways about 30bp. In the UK, the BoE council will meet on Thursday as tensions mount between the UK and the EU. On September 9th, 2020, the British government presented Parliament with a law violating the divorce agreement signed last year. Whilst bond yields rallied, Sterling lost more than 3% to $1.28. The BoE may nevertheless choose to extend QE in November.
European corporate credit markets (115bp over Bunds) traded sideways with financials widening only modestly and cyclical sectors faring a little better. European high yield performed more strongly. CDS indices exhibited higher volatility. Indeed, iTraxx Crossover hit a low near 305 but closed last week above the 320bp mark. In the US, credit spreads increased a bit more, especially in high yield as lower oil prices took a toll on energy credit.
The Nasdaq correction continued last week. Nasdaq 100 lost more than 4% in just four trading sessions. The accumulation of long call positions throughout the summer inflated technology stock valuations considerably. Since then, traded volumes of put and call options have returned to balance. For the time being, the Nasdaq drawdown has had no impact on the broader equity market but did foster rotation into cyclical sectors. European markets have now retraced part of their underperformance vs. US peers. The energy sector underperformed in keeping with lower Brent prices whilst cyclical benefitted from sector rotation flows. The Euro Stoxx index (comprising about 300 euro area stocks) is now down less than 5% year-to-date in USD terms. The US S&P 500 is still up some 5% so far this year.