There are undoubtedly similarities between the current situation in Europe and that in Japan: ageing of the population, zero rates, etc. There are also important differences which make it possible to hope that Europe is not caught up in a deflationary spiral. The main difference is the strength and speed of monetary policy response. The treatment provided to the patient is different, which helps to maintain hope, even if it does not necessarily mean that the end result will be different.

A Cause for Pride: In 2015, the launch of EQ prevented deflation.”
-    Benoît Cœuré – interview at Libération, December 16, 2019
The term "japanification" covers the idea that Europe, or at least the Eurozone, is on the same trajectory as Japan. But because the term is poorly defined, each commentator has its own definition … and therefore its own conclusion. So here we’re looking at the different aspects of “japanification”.

One of the major differences between Japan and the eurozone is the starting point; the Japanese crisis stems from the bursting of a housing bubble of an inconceivable and unprecedented scale. This type of crisis is different in the sense that real estate is a widely distributed collateral, at least more widely than equities. When real estate collapses, it has a lasting impact on the solvency of borrowers and credit banks in a country that is otherwise very closed to foreign financial institutions. Some countries have experienced the bursting of their housing bubbles but this has not become widespread throughout the euro area.

Let’s start with a long, even very long, term view: demography. With a fertility rate well below 2.1, the European population is expected to decline. Economists are more concerned about the working-age population. The graph below shows that Europe is doing well following of Japan. It has a declining labour force since the mid-1990s, just after the boom in the speculative bubble. Europe, on the other hand, began its decline in the second half of the previous decade. 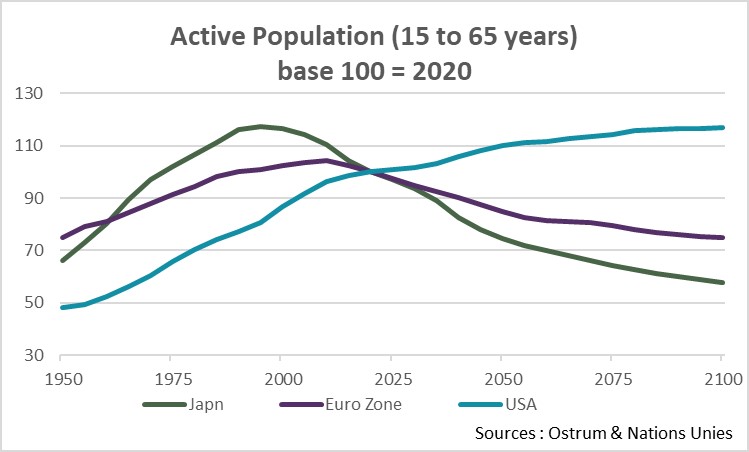 It should also be noted, however, that adverse demographics are not inevitable. There are three ways around the problem:

Conclusion: although the demographic trend is very similar, it should be kept in mind that the extent of the reduction of the working population is less in the Euro Area than in Japan.
Japanification score : 4/5

The chart below tells us that European economic growth has recovered at the same rate as Japanese growth. The year of recession in Japan was 1993 and the country recorded a cumulative growth of 14.4% over the ensuing decade. The Eurozone hit a low in the first quarter of 2009 and gained 15.1% over the same period. At an annual rate, the Euro Area makes 1.4% against 1.3% in Japan, a totally negligible difference. 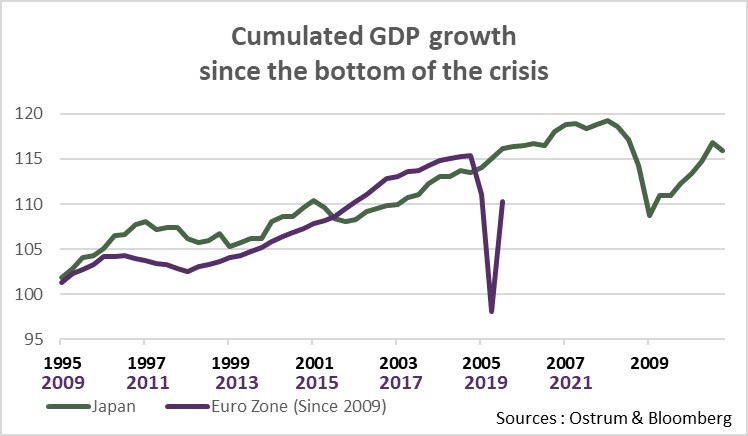 Moreover, the similarity of economic performance is maintained in terms of productivity. The change in the labour force in Japan over the decade after the crisis was 0.0% on average per year compared to -0.1% in the euro area. As a result, GDP per capita growth is somewhat more favourable in the case of the Eurozone, but this remains within very low margins.

In summary, the two trajectories are very similar. 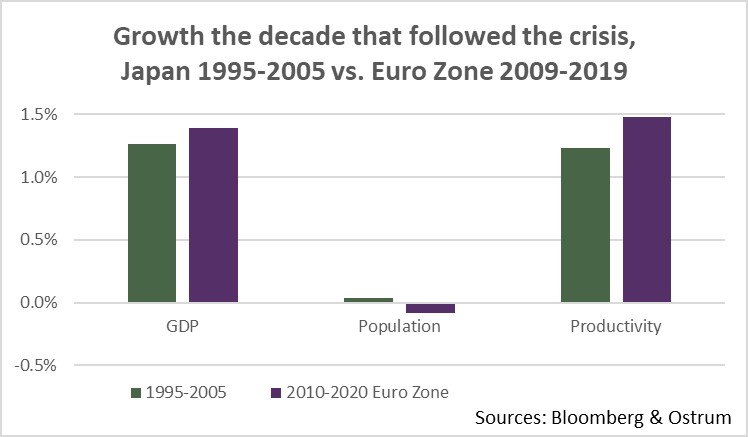 Conclusion: no significant difference between Japan’s growth trajectory over the decade following the crisis and that of the Eurozone.
Japanification score : 5/5

One of the main features of “Japonisation” is deflation. The chart below shows that inflation remained very low after 1995. Over the next ten years, the average was -0.1%. By contrast, while European inflation has been low, it has never been permanently negative. Since 2009, euro area inflation has averaged 1.1% at an annual rate. Although this figure is low, below the ECB’s 2% target, the trend is dissimilar from that of Japan. 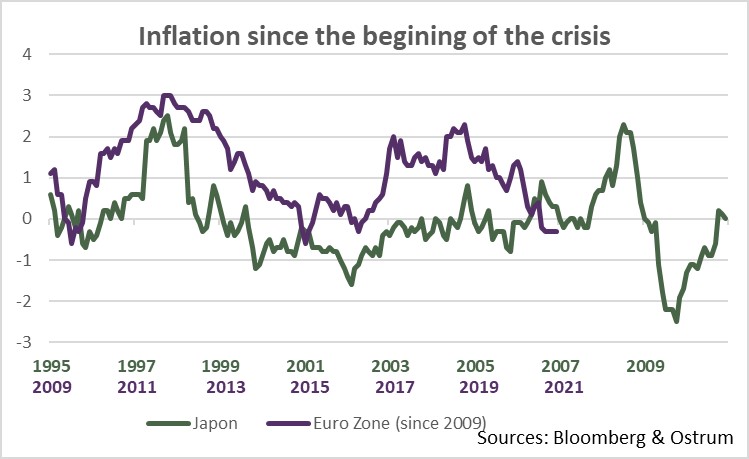 If we turn our attention to the cumulative growth of the price index, the divergence between the two indices is even more marked.

Other measures of inflation may also be of interest. In particular, core inflation, which excludes food and energy prices, or the GDP deflator and consumption deflator. 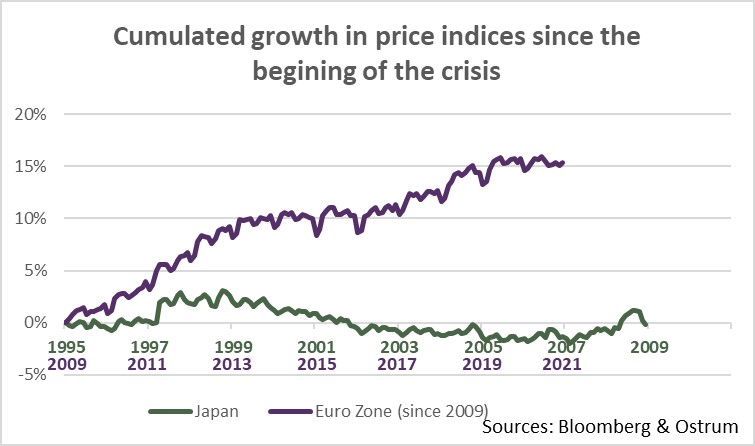 The message remains the same: Japan is in deflation, with a very slow fall in prices, while the progression of the indices of the Euro area is of the order of 1.0 to 1.5% over the period. Once again, euro area inflation is low, below the ECB target, but remains above zero. Deflation did not materialise in the Eurozone. 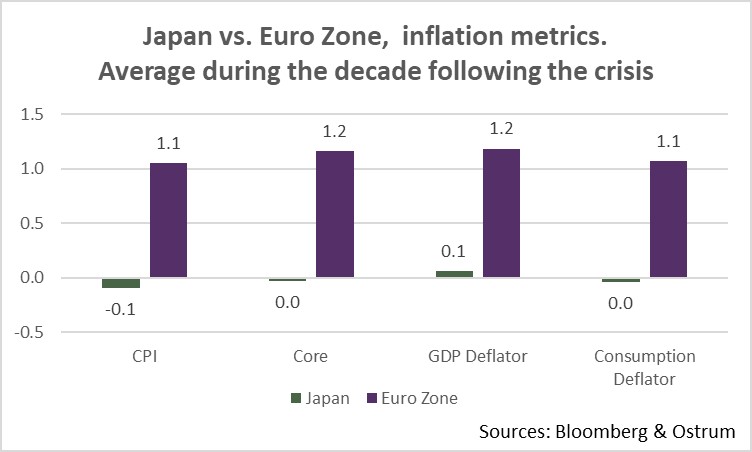 What about inflation expectations? As far as the market is concerned, there are unfortunately no series in Japan, with dates spanning back to the decade following the crisis.

On the other hand, a current photo also shows a very strong divergence Japan/Eurozone. Japanese expectations are very stable and close to 0% over the next ten years, the market does not believe at all in an exit from deflation. The case of the Eurozone is not very comfortable, but the curve is above 1%. Once again, this is below ECB’s objective, but the market is keeping inflation normalization as the central scenario, albeit very slowly.

The argument is important, one of the main causes of the persistence of deflation is the low level of expectations that creates an anchor. The fact that these expectations remain at a decent level therefore constitutes a fundamental difference between the Japanese and European situation.

Conclusion: on one of the fundamental elements of Japonisation, the persistent deflation, the Eurozone stands out very clearly. While the risk of deflation cannot be ruled out, inflation has remained far from zero.
Japanification score : 2/5

If there is one important difference between the Japanese experience and the Eurozone, it is the speed and scale of the monetary policy response. The BoJ has been criticized for reacting too timidly and too late to the problem.

Has the ECB done better? The difference, judging by the evolution of the rates, is marked. To do this we take as the starting date of the crisis the peak on the equity market, December 1989 in the case of Japan, May 2007 in the case of the Euro Area.
The first graph below shows the evolution of short rates. The famous “ZIRP” for “Zero Interest Rate Policy” was introduced in Japan in April 1999, 9 years and 4 months after the market peak. The ECB was faster by 2 years. The difference is noticeable but maybe not that substantial.

However, the difference is more substantial on the transition to negative yields: 7 years and 4 months after the start of the crisis in Europe, while the three-month Japanese rate is still not there, after 20 years. The difference is important because while the BoJ has implemented a zero-rate policy, it has always communicated on the idea of a future normalization. Rate expectations show that the aggressiveness of the message is below that of the ECB. 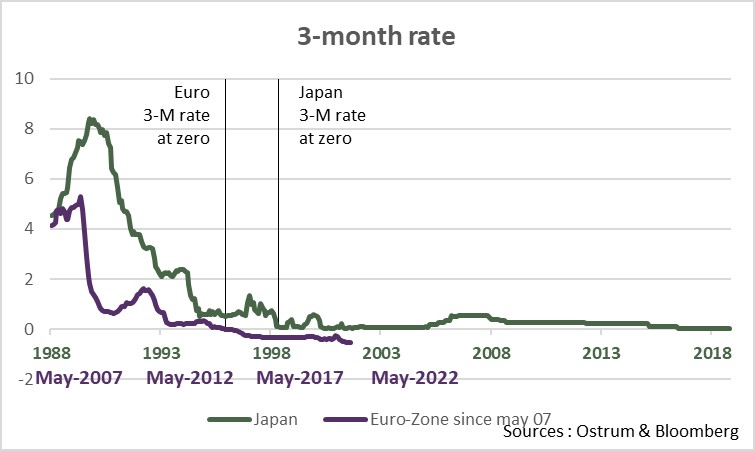 Long rates, we use the 10-years tenor, also plunged much faster in the Eurozone. Almost 3 times faster.

In summary, the ECB was more aggressive and faster than the BoJ. The table below summarizes the evolution.

To be complete, of course, QE must also be mentioned. The BoJ’s balance sheet currently represents 133% of the country’s GDP compared to 63% in the case of the ECB. But here too, the ECB reacted faster than the BoJ, at the same point in the cycle, the BoJ had a balance sheet of about 25% of GDP and it took more than a decade to reach the level where the ECB is currently.

Conclusion: whether in terms of rate level or EQ, the ECB reacted faster and more aggressively than the BoJ. The lessons from "too little too late" was retained and the reaction function was therefore modified. Does this mean that the ECB will lead the Eurozone economy out of Japanization? Nothing is less certain: the treatment given to the patient is different, it does not necessarily mean that the result will be different.
Japanification score : 1/5

Last point on the financial markets, the performance of equities. The chart below shows that since its May 2007 high, the Euro Stoxx is still 9% lower, so it has not quite corrected the 58% decline recorded in two years. Over the same time frame, the Nikkei not only was still 73% lower than at its peak, but had not yet hit its lowest which would be reached 5 and a half years later.

There is therefore a major difference between the market performance of the two zones. Although the Euro Stoxx has not fully recovered (it should be noted that by taking into account dividends payments, the performance since the 2007 highs is positive) its performance is incomparably better. This is probably the result of a speculative bubble exacerbated in Japan but it is also the result of a much better European trend that allowed the indices to recover. 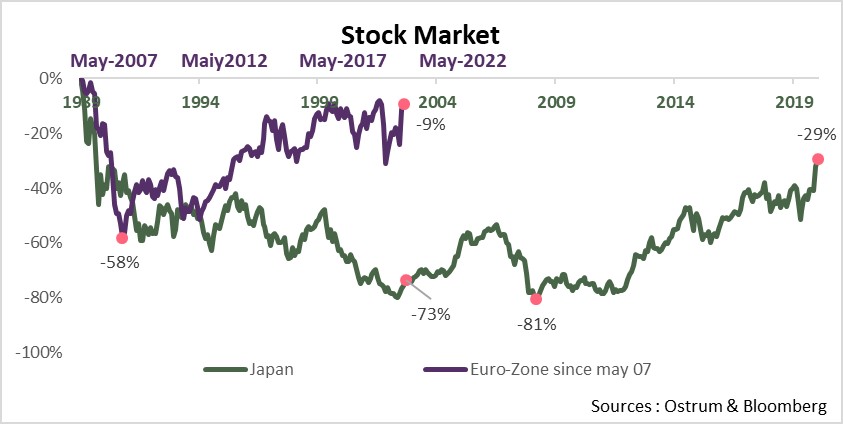 Conclusion: even if the Euro Stoxx has not completely recovered, and therefore not completely digested the past crisis, the difference with the dynamic of the Nikkei is impressive.
Japanification score : 2/5

Is the Eurozone in a phase of japanification? The answer is ambiguous and this is the main message. There are undeniable similarities and parallels, the trajectory of growth in the first place, the demographic aspects of course but also the legacy of the crisis in terms of the financial sector being convalescent.

There are also significant differences on crucial topics, particularly in terms of monetary policy response. The result on some aspects is also inconclusive with, for example, a stock market performance that has still not erased the crisis but is much better in the European case.

The main point is then perhaps the fact that doubts remain and that the Eurozone is still under risk. It also means that the efforts made have put the area on a different trajectory than that taken by Japan, but that the battle is far from won. One of the main factors behind the Japanese slump is the health of its financial system, which has weighed on growth and prevented a more marked recovery.

The market performance of the European banking sector is surprisingly close to that of Japan. And this is very worrisome. 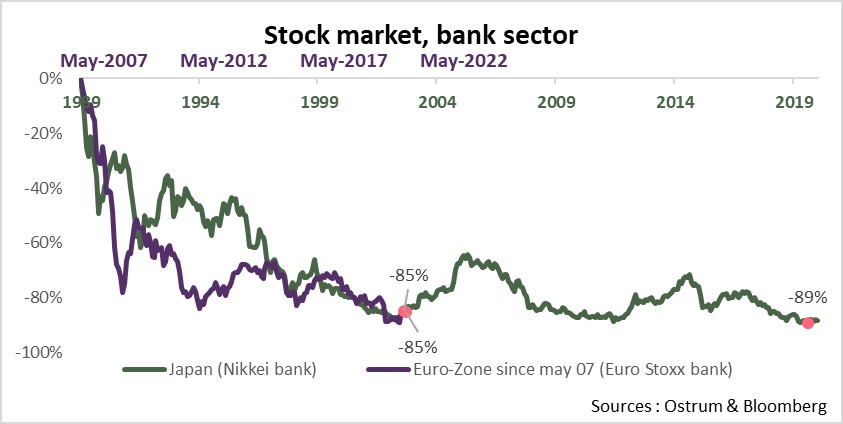 The diagnosis of the state of the European financial system is therefore key to understanding the future trajectory.