The reflation theme continues to be dominant across financial markets despite a deleterious political backdrop in the US. T-note yields rose to 1.10%. In Europe, as equities move higher, spread compression accelerated.

Financial markets have been in levitation so far this year. The outcome of the Georgia Senate elections revived the reflation investment theme, which shows in steepening strategies, exposure to index-linked bonds and US small cap stocks. Donald Trump’s mandate is ending in chaos. Representatives and Senators from both sides of the aisle now call on Michael Pence to activate the 25th amendment of the Constitution to declare the President incapable of executing the duties of his office after he called for insurrection to block the validation of the electoral college vote. In turn, Donald Trump’s latest decisions ordering delisting of Chinese companies from US markets only highlight his willingness to leave a land mine field ahead of Joe Biden as it relates to US-China relations.
On economic grounds, US growth, likely about 8 %qa, was solid in the fourth quarter. Unemployment stabilized at 6.8 %. Hours worked expanded at a 10.1 % annualized rate in three months despite 140K jobs lost in December. Layoffs have been concentrated in the leisure and hospitality sector           (-498k) but activity is strong in the rest of the economy. Manufacturing surveys (ISM at 60.2) point to strong growth. Service sector activity, most exposed to lockdown measures, was up at 57.2 in December. Consumer spending picked up from November with solid car sales topping 16mn at annualized rate.
In parallel, global trade continues to improve as evidenced by rising factory orders in Germany through November. Freight prices in Shanghai reflect strong trade flows. The situation in Europe is quite uneven. Economic surveys have been spotty (especially in services), and growth may roll over again in the early part of 2021. The vaccination effort, which is crucial to ensure the economic recovery, is faced with a new Covid variant and logistic difficulties.

The reflation trade goes hand in hand with the US fiscal outlook after Democrats secured a majority in Senate. Joe Biden’s platform indicated 4T federal spending until 2024. The ensuing deficit increase sparked a run-up in T-note yields to 1.10 %. Curve steepening continued as short-term yields remain anchored about 0 % possibly until 2023. The Treasury quarterly refunding to be communicated in early February will be a determining factor for bond markets as T-bill issuance may be refinanced via long-term bonds ahead of tough discussions on the US federal debt ceiling. Yield targets may point to higher bond yields… until the Fed eventually steps in although Richard Clarida suggested no policy change last week. December FOMC minutes offered little guidance as regards asset purchase programs. The bond market will test the Fed’s reaction function amid rising inflation. The oil price rise engineered by the Saudi Arabia output cut (-1mbpd from February) and the recent depreciation in the US dollar have underpinned the inflation expectations. Ten-year breakeven inflation rates stand above 2 % (and even 2.29 % on inflation swaps).
In the euro area, the new Bund benchmark was issued last week (-0.52 % close). Despite rich valuations, Bunds barely reacted to upward pressure on US yields. January bond syndications have started with several public-sector deals (15-year BTPs, 10-year Irish bond). Bonds sold at spreads well below initial guidance. Spread tightening is fueled by institutional cash to invest and announcements reduction in net issuance this year. Indeed, Spain revised its net borrowing forecast down by €10b to €100b in 2021. Portugal also revised issuance projections lower. The 10-year Bono trades about 55bp spreads. In parallel, a German land managed to borrow €2b below 1 % yield at 100-year maturity. Excess demand fueled by large ECB bond buying does complicate fundamental sovereign spread analysis. Inflation expectations also rose in the euro area despite currency strength. Breakeven inflation rates crept higher to the tune of 5bp.

Regarding corporate bonds, the average yield on euro IG hovers about 0.2 %. Spreads narrowed 4bp last week to 88bp vs. Bunds. Strong primary market issuance seems to spur demand as spreads fall below initial estimates. High yield richened although valuations seem inconsistent with underlying credit risks in the context of the pandemic. One may wish to dial down exposure to European high yield bonds as spreads tighten (now 30bp below 5-year average in BBs). In turn, equity implied volatility, which remain somewhat elevated considering record index levels, does contribute to widening pressure in iTraxx crossover spreads.
Lastly, equities are up between 2 and 6 % so far in 2021 with notable outperformance from the Russell 2000. The pickup in the dollar however raises question. The reduction in cross-currency swap margins could support the dollar in the near term. Likewise, the impeachment of Donald Trump would likely spark the unwinding of speculative short dollar positions. The euro has indeed retraced earlier gains to less than $1.22. 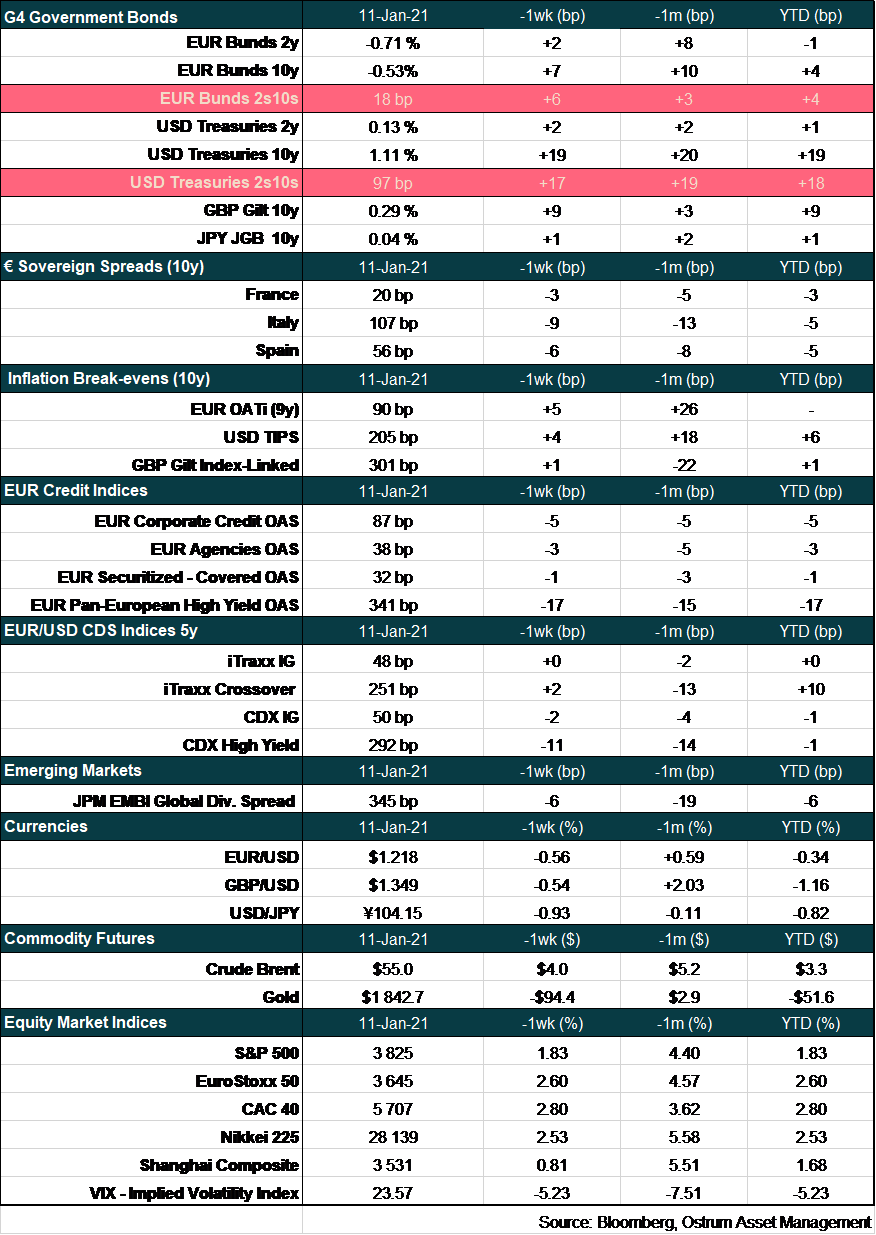