ECB and its material impact on public debt

The ECB has taken measures to maintain very accommodative financing conditions. We estimate that the net supply of sovereign paper after QE will be negative next year. On the other hand, despite the increase in debt, thanks to the maintenance of very low rates, the debt service will fall by several billion for each of the four big countries.

As announced at the October 29 meeting, the ECB took steps to maintain very favorable financing conditions for longer due to the second wave of Covid-19 and its negative impact on growth and inflation in the Euro area.
The most important measures, taken on December 10, lie in the strengthening and extension of the two instruments most able to face the current crisis: the pandemic emergency purchase program (PEPP) and the targeted long-term refinancing operations (TLTROs).

The size of the PEPP has been increased by 500 billion euros, to 1.850 billion, and its duration has been extended by 9 months, until at least March 2022. This program will last as long as the Covid-19 crisis is over. Reinvestments of maturing securities acquired under the PEPP are extended for one year, until the end of 2023 at least. In order to reach a compromise between the different members of the Governing Council, the introductive statement indicates that the ECB couldn’t use the whole envelope if very favorable financing conditions could be maintained without having recourse to the whole of it. It could, however, increase it otherwise. As of December 4, the ECB has purchased 717.9 billion euros under this program. The full envelope will be used at the end of March 2022 if the ECB buys 17 billion euros per week of assets (the average since July is 16.2 billion euros per week).

The ECB has also extended by one year, until June 2022, the period during which very favorable refinancing terms will be offered to commercial banks (TLTROs), on condition that they continue to lend to households and companies. They will then be able to borrow from the ECB at a rate of up to -1%. The ECB thus pays the banks so that they continue to lend to the private sector and more particularly to SME’s, severely weakened by the Covid-19 crisis.

Deterioration in growth forecast in 2021
The resurgence of the pandemic since October and the negative impact of the containment measures adopted since November on activity and inflation naturally lead the ECB to extend its asset purchases as part of the PEPP. This was announced when it was launched on March 18: the PEPP will last as long as the Covid-19 crisis is not over.
The services sector is once again the most affected which will result in a contraction of the Euro area GDP in the last quarter, -2.2% according to the ECB, and an increase of only 0.6% in the first quarter of 2021. The ECB still considers the risks to growth on the downside but less pronounced than before due to the improved outlook linked to the upcoming availability of vaccines.
Growth forecasts have therefore been revised downwards in 2021 compared to those published by the ECB in September (3.9% against 5%). In 2020, they are revised slightly upwards due to a stronger rebound than expected in the 3rd quarter (-7.3% against -8%). In 2022, forecasts have been revised upwards (4.2% against 3.2%) and for 2023, growth is expected at 2.1%.

Lower inflation outlook across the horizon

This negative shock to activity again weakens the ECB’s inflation outlook. Core inflation, excluding food and energy, has been revised downwards over the entire projection horizon. It’s currently at an all-time low: 0.2% in November, due to the very weak contribution of the service sector, which was very affected by the crisis. This reflects the insufficiency of domestic demand and the lack of pressure on wages following the deterioration of the labor market. Added to this is the appreciation of the euro against all currencies which

weighs on the price of imported goods and thus contributes to low inflation. The ECB has thus reiterated that it is closely monitoring developments in the exchange rate.
In 2023, the ECB’s inflation outlook is only 1.4% for headline inflation and 1.2% for core inflation. We are a long way from the ECB’s objective of an inflation rate close to but below 2%, which calls for maintaining a very accommodative monetary policy for a very long time.

Tightening credit conditions
The ECB has extended TLTRO’s operations on very favorable terms due to the tightening of credit conditions observed over the past 3 months for households and companies. These very attractive operations aim to encourage banks to continue their loans to the private sector and thus avoid a credit crunch, which would have serious consequences for growth and inflation.

The strengthening and extension of the ECB’s purchases under the PEPP come on top of the purchases made under the financial asset purchase program (APP) of 20 billion euros per month. They aim to continue to exert a lasting influence on the entire yield curve to foster the conditions for improving domestic demand and reduce deflationary pressures.
These massive purchases also aim to support the States which are very heavily indebted, in order to take the necessary measures to face the greatest recession since the Second World War, and thus enable them to finance themselves at very low rates.

To give an idea, we estimated the amount of net issues of the States in 2021 (gross issues – redemptions – coupons) and we compared it to the purchases that the ECB could make. These estimates should, however, be put in perspective, particularly given the uncertainty about the state’s future financing plans, the syndications that will be carried out and any recourse to loans from the European Union.
In 2021, gross emissions of the States are estimated at 1 190 billion euros. Removing coupon payments and maturing debt, we estimate a level of the net emission at 565 billion.
We assume, in line with historical pattern, that the purchase of sovereign bonds by the ECB (excluding supra-nationals) will amount to 87% of the PEPP and 68% of the APP. We also take into account a certain seasonality in ECB purchases, as purchases tend to be frontloaded at the beginning of the year since issuance are as well. The total amount of ECB purchase could thus amount to 955 billion. Finally, the amount of net government issues after ECB purchases is estimated at -390 billion euros. In 2021, the ECB’s purchases will be much larger than the net issues of governments, creating a vast excess of demand for sovereign bonds in order to maintain very advantageous financing conditions.

The crisis has accentuated the divergences between sectors, households and countries and fiscal measures are proving to be the most effective in that case. In this context, the agreement of the 27 on the European recovery plan and the multi-year European budget is excellent news after weeks of uncertainty linked to vetoes from Hungary and Poland. The European recovery plan indeed include a significant portion of subsidies intended for the countries most weakened by the Covid-19 crisis and with high public debt (Spain and Italy in the lead). This news allowed rates of peripheral countries to reach all-time lows last Friday.

A major effect on the cost of the public debt

If ECB’s action has an impact on the volume of paper available for investors, it also has important consequences in terms of funding costs for governments. To illustrate this idea we compare two interest rates in 2020 for the four largest economies of the Euro zone. First the « effective interest rate » defined as the ratio between the debt service and the level of existing debt. This can be viewed as the effective average rate paid on the outstanding public debt. Second, the average market yield on outstanding bonds. This would be the rate paid by a government if it was able to reissue all its debt. The difference between those two rates is striking. 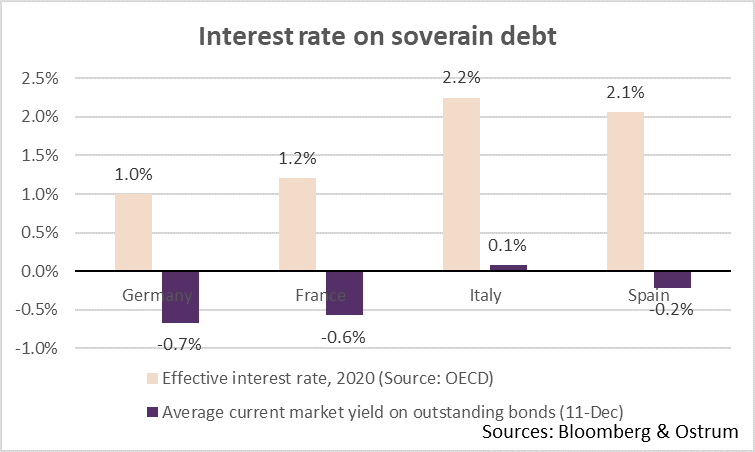 The effective interest rates are thus bound to decline next year. First because the new debt will be issued at market rates, hence at a much lower yield than the existing one, which will drive down the average. Second, because the maturing debt, which has been issued in the past with high coupons, will be reissued and replaced by bonds that will carry a much lower coupon.
In the case of Germany, four bonds are maturing next year: they account for 54 billion euros and have an average coupon of 2.69%. There is little doubt that Germany will be able to issue at a much lower level: if we assume a zero coupon, this would shave-off 1.5 billion in interest payments for the Treasury.

This trend is nothing new. Using again the OECD data we can compute the trajectory of the effective interest rate for the four bid Euro zone countries, since the start of the century. 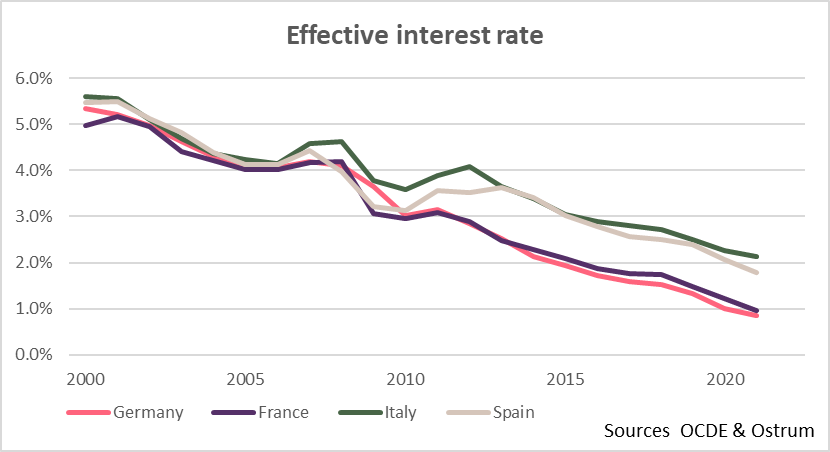 One effect of ECB’s QE, as mentioned above is to keep rates low. But one should not underestimate also the fact that it has stabilized yield, hence provided visibility for governments’ budgets. The low volatility of European peripheral throughout this year is in sharp contrast with the pre-QE period in 2009-2015.

What will be the effect of QE on the cost of funding in 2020? Because of this stability provided by the ECB, we assume that the curve will not move. This is obviously a simplification, but because of the ECB’s action this will provide correct order of magnitude to our simulations.

The result is surprising! Of course, our simulations lead to an effective interest rate that continues to head South rapidly. The drop is about 1/4 ppt, except for Germany as yield there is already very low. But the surprise comes form the level of debt service which goes down as well. The debt to be issued next year will accrue governments’ debt service but the low level of yields means that the impact is minor. Meanwhile, the maturing of existing debt and its reissuance at much lower yields means a substantial saving for governments. Result: debt service will decline by several billions for governments while their debt is still increasing fast!

The argument is important because it shows the impact of the ECB’s policy. But it also has implications in terms of debt sustainability. The analysis of public finance sustainability heavily uses the ratio debt to GDP. We note, in passing, that this ratio divides a stock by a flow, which is pure heresy from a methodological point of view. Never mind… The point is that debt service will, in all likelihood, decline next year. It seems to us that it is more relevant to analyze the sustainability of the debt to look at the ratio debt service over fiscal receipts. This ratio tells us what part of the government’s budget is swallowed by debt costs. If we take an extreme case: Japan. The undisputed champion for public debt, according to the OECD, will have at the end of this year a debt to GDP of 241.6%, but its debt service will also be one of lowest among OECD countries at a mere 0.18% of GDP. The trend is similar in Europe as demonstrated by the chart below. 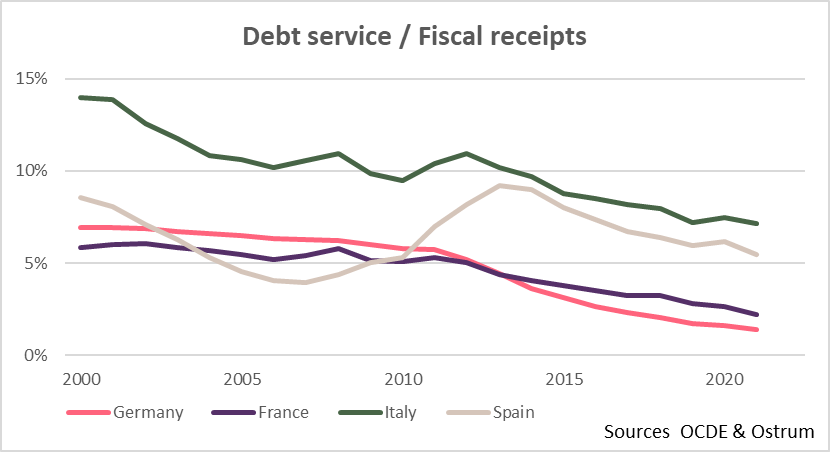 There is no denial that the large level of public debt in Europe is an issue in many respects. But in terms of financial cost, the action of the ECB has worked wonders and has more than compensated the increase in the stock of debt. This has major consequences in terms of debt sustainability, but also, and more importantly, in terms of room for maneuver for governments’ budgets.