Inflation/growth: the big gap on the markets?

With inflation rising at the beginning of the year at a level not seen for more than a quarter of a century, central banks are facing a dilemma and are being forced to raise rates faster than expected. Uncertainty about the impact of rate hikes, compounded by the current geopolitical situation with the conflict between Russia and Ukraine, is causing investors to fear a possible recession. Asset managers are now obliged to adapt their investment strategies in order to be able to offer advantageous solutions that allow investors to protect themselves from inflation or to take advantage of the current environment.

Inflation has always been a key issue for markets. But they are now facing an unprecedented situation where inflation in the OECD is at its highest level for over thirty years. Within the OECD, the producer price index is soaring at an unprecedented rate and the consumer price index also continues to rise sharply, surprising all analysts, both in the eurozone and globally. 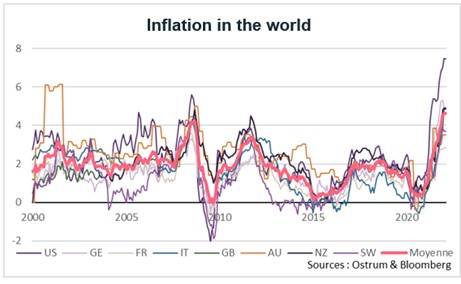 There is a significant common component to inflation in all OECD countries, empirically, it is found that about 80% of countries' inflation is affected by movements common to the whole OECD. This explains why the phenomenon is generalised to all developed countries, which provides the investor with a particularly broad asset class from a geographical point of view. However, the differences between countries remain sufficiently large to offer important investment and diversification opportunities.
Central banks forced to react, but are they really motivated?
Faced with this rise in inflation, central banks are forced to review their copy: while most thought that the inflation recorded in 2021 would only be a transitory phenomenon, the outlook has now changed and a fairly strong monetary tightening is expected by the end of the year. 37 rate hikes have already taken place in the first quarter of 2022 and more are expected throughout the year (including 9 from the Fed alone). Key rates, which have been fairly stable until now, are expected to rise significantly until 2023.
However, according to Stéphane Déo, Director of Market Strategy, recent decisions by central banks raise doubts about their willingness to bring inflation down. While central banks are keeping their key interest rates fairly low, the use of the Taylor rule indicates that central banks should apply a much more ambitious path than the one currently followed. The Taylor rule aims to define a policy path that is binding on monetary authorities. It is based on the calculation of an assumed "optimal" short-term interest rate, compatible with the central bank's inflation objective and the evolution of the "output gap". However, if we apply the Taylor rule to the United States and Europe, the results are 9.8% and 6.4% respectively, which is a huge difference from the rates currently applied. This raises doubts about the willingness of the Fed and the ECB to return to a 2% inflation rate.
Unusual price dynamics
In addition to the unprecedented levels of inflation, the markets are also facing another unusual situation, this time concerning price dynamics: the rise in energy prices is increasing at the same time as the rise in the prices of non-energy goods. This correlation has become positive for some time, as companies pass on the cost of energy production in their selling prices. The prices of other goods are rising, rather than falling as a result of their lower consumption. This situation could lead to an inflationary oil shock, according to Stéphane Déo. 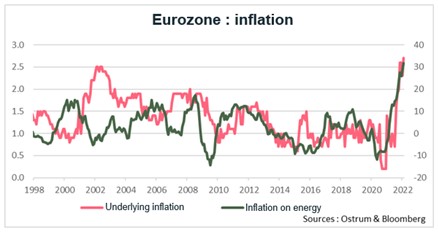 Many factors can explain this situation: first of all, the trend towards de-globalisation, which leads to additional costs as people leave countries where labour tends to be cheaper to relocate. Secondly, the reaction of wages, which are being shaken by an employee-employer bargaining power that is partly distorted by low unemployment and the expectations of the parties involved. Current conditions seem to point towards wage inflation in Europe, a situation that would be unprecedented for 25 years. The more accommodating attitude of central banks explained above, as well as the growth of the money supply are also important factors. Finally, the Russian-Ukrainian conflict and the shock it caused on the commodity markets may also explain this exceptional situation.

The inflation market: which investment strategies?

The inflation theme has been present in the market since 2016 and has been reinforced in 2021 following the fiscal and monetary stimulus in developed countries. Since the Covid crisis, the breakeven curve has continued to rise," notes Alexandre Caminade, Director of Core Fixed Income and Alternative Liquid Funds, "and the Russian-Ukrainian conflict (whose consequences on energy prices are likely to persist) and the rise in commodity prices are only accelerating the trend.
Persistent inflationary trends at a global level
Eurozone: since the beginning of the year, the level of swaps, particularly on the short side, has risen sharply with a clear acceleration since the Ukrainian crisis. In the euro area, inflation swaps have accelerated sharply. The short end of the inflation swap curve has risen the most, leading to a fairly sharp inversion of the curve with the 2-year-10-year swap rapidly falling into negative territory. 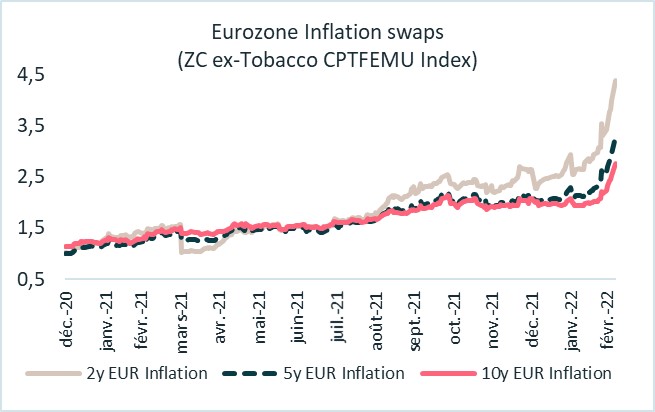 United States: the same situation occurs. There is a strong increase in 2-year, 5-year and 10-year swaps, but more regular than in the Eurozone. Longer term swap levels are higher which contributes to a less negative inflation swap curve. 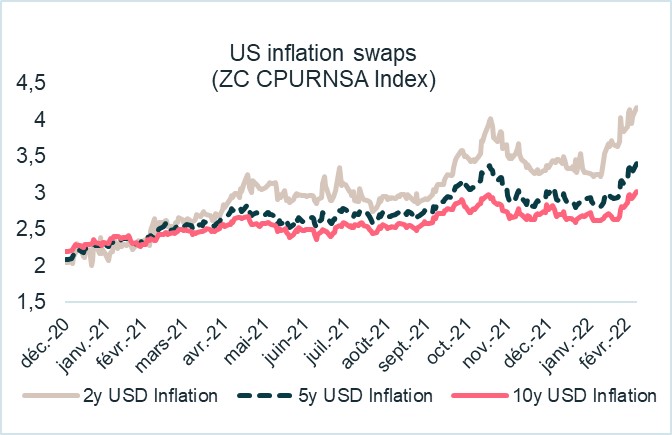 However, one point differs in both regions: the US is experiencing an inflation-wage loop, which is persistent and continues to influence the country's inflation rate.
At the global level, inflation swaps are trending upwards and swap curves are trending downwards, more or less sharply. Abdel-Rani Guermat, Inflation Manager, believes that the global rise should continue in the coming months.
A rise in nominal rates linked to inflation breakeven
Since 2021, we have seen a continuous rise in inflation in developed countries, which has contributed to the rise in breakevens, which has influenced the evolution of nominal rates (which represent the yields of a conventional bond) and real rates (which represent the yields of an inflation-linked bond). 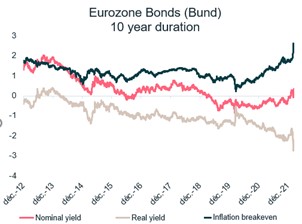 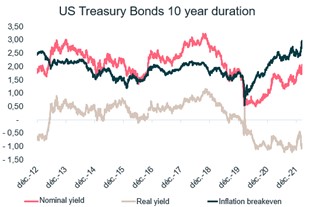 Cyclical factors (rising commodity prices, bottlenecks in production chains, price repercussions for companies) and structural factors (relocation, energy transition) will support these increases. In the United States, the rise in property prices should lead to high inflation figures.
Attractive carry trade
Another factor that should also support the asset class is the carry (the gain or loss the investor makes on the coupons by holding the inflation-linked bond over a given period), which should remain quite high and attractive for the coming year.

Index-linked bonds therefore seem to be an attractive asset class in these times of rising inflation.  According to Bloomberg data, global inflation indices are outperforming nominal sovereign rate indices and the trend does not seem to be stopping, with a strong increase in inflation asset class subscriptions in the US and European markets since the beginning of the year.

What are the solutions to protect one's portfolio from inflation?

According to Rémi Lamaud, Expert Solutions, two types of products are currently available to investors:

> For structured interest rate products, inflation is a component of the formation of long-term rates: higher inflation pushes rates up. It is therefore important to choose the reference (long, slope, forward) carefully, as they do not all react in the same way to inflation. You also have to pay attention to the leverage effect: since interest rate variations are lower than those of inflation, you have to apply leverage to have variations of the same magnitude.
> As for traditional products (equities, emerging markets, interest rates), inflation is transmitted to financial assets and is measured through correlations. Depending on its source, the reactions of the asset classes can be different, and the correlations very unstable.
If we look at the recent evolution of equities and euro assets in the face of rising inflation, we see that equities, which had performed very well in 2021, have not kept up with inflation since the beginning of the year. Sectors such as pharmaceuticals and retail, which are fairly immune to inflation, could benefit from sector rotation.
On the other hand, the acceleration of inflation in February has benefited inflation-linked securities, which therefore seem to be an appropriate asset class in relation to recent risk statistics: the "scissor" effect between equities and inflation-linked securities, observed at the beginning of the year, improves the risk characteristics and the Sharpe ratio (expected return divided by volatility) of portfolios invested in indexed securities.

1.    IPE Top 500 Asset Managers 2020 ranked Ostrum AM as the 77th largest asset manager, as at 12/31/2019. Any reference to a ranking, a rating or an award provides no guarantee for future performance.
2.    Ostrum AM was one of the first French asset manager signatories to the PRI in 2008. More details; www.unpri.org
3.    Source: Ostrum Asset Management, consolidated data at end-December 2021. Administered assets include Ostrum AM's assets. The services provided for a given client may concern certain services only.