Equity markets ended last week on a softer note. Discord between the Treasury and the Fed, the Brexit impasse and the evolution of the pandemic contributed to profit taking. The S&P 500 lost 0.7% last week over five trading sessions, despite a bounce in technology stocks. Europe was up (+1% on Euro Stoxx 50) thanks to banks, cyclicals and energy amid higher oil prices ($45 Brent).
T-note yields drifted lower towards 0.82% last week whilst Bunds (-0.58%) dipped further below the deposit rate. Yield curves have flattened out in particular at the back end of the US Treasury curve (10s30s spread (-6pb). Inflation breakevens were hit by the decline in nominal rates despite solid demand at TIPS auction. In the euro area, sovereign spreads have stabilized near year lows (BTPs at 122bp).
Credit continued to outperform in both dollar and euro markets. European IG corporate bonds tightened by 20bp so far in November. Spread compression benefits high yield considerably (-91bp in November). In turn, iTraxx XO closed at 282bp.
Dollar depreciated slightly last week. The euro appears to be leveling off about $1.185. 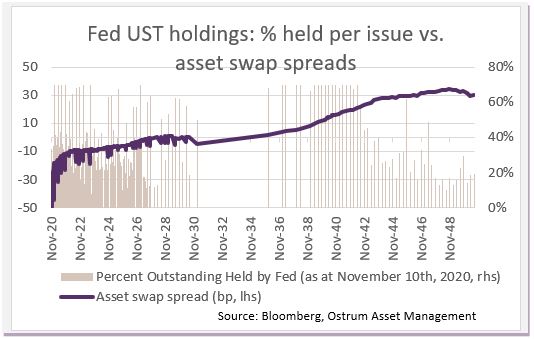 Financial markets bet on a lengthening of maturities bought by the Federal Reserve. The Fed rolls maturing bonds at auctions and purchases $80b Treasuries per month. Current asset purchases imply little curve bias. A twist would weigh on long-term interest rates. The decline in yields would entail limited support at a time when demand for mortgage is indeed very elevated. The Fed is unlikely to act before Congress strikes a stimulus deal.
However, investors may position for a twist scenario by owning securities under-owned by the Fed and relatively cheap on the asset swap spread curve. This may include 2042-2045 maturities and the 2048 area.

A rocky road to recovery

Financial markets seem to be acknowledging that the path to an economic recovery, now envisaged thanks to vaccine progress, remains a mine field. Political risk is now making headlines again ahead of Thanksgiving. The chaotic transition of power in the US is now having an impact on economic policy. Treasury Secretary Steven Mnuchin announced that five Fed facilities funded by Treasury equity stakes will expire at year-end. These financing vehicles, most of which remain little used, were designed to provide backstops to credit markets, municipalities funding and financing for small businesses hit hard by the pandemic and expand the Fed’s lender of last resort duties. Similar Fed SPVs had been set up in the 2008 financial crisis to help restore the flow of credit into the economy. The pandemic has so far had a relatively muted impact on the financial sector. A financial crisis at this juncture would however be a catastrophe. The pullback of these insurance schemes is quite revealing of the willingness of the outgoing Administration and the Republican majority in the Senate to hamper President-elect Biden’s ability to act swiftly in the context of a pandemic. In Europe, Brexit negotiations have made no progress. France and Belgium are calling for preparation for a no-deal exit on December 31st, 2020. Political rift is ongoing also among the remaining 27 EU member states. Veto by Poland and Hungary to the European recovery fund is just another example. The fund may start being deployed in the second half of 2021, hence there should be enough time to iron out disagreements or get around them.

Besides the tense political backdrop, the deterioration in the epidemic imposes new curfew and lockdown measures across Europe and an increasing number of US cities. Activity is set to return to contraction in Europe. GDP may fall by anywhere between 4 and 6% in the three months to December. In the US, the inevitable downturn induced by lockdown measures may be visible in the first quarter.
The stop-and-go recovery pattern underpins safe-haven assets. Bond yields have fallen back to 0.82% at weekly close in the US and -0.58% on Bunds. We have observed a sharp flattening in the US. The narrowing in the 10s30s spread (-6pb last week) may reflects expectations of some form of Fed easing in December. Another bout of operation twist (lengthening of average maturities bought by the Fed) is being discussed according to several bank researches… at a time when the consolidated
balance sheet of primary dealers show net positioning of $54b on Treasury securities with maturities above 11 years, the largest exposure since May. The idea that the Fed may be able to make up for inaction by Congress is however dubious. Firstly, residential investment which is most sensitive to long-term interest rates needs no stimulus at present. Homebuilders’ confidence is at all-time highs (NAHB at 90 in November) and mortgage refinancing is very buoyant. Secondly, the Fed rolls maturing securities at auction. The reintroduction of the 20-year bond in the issuance program already raised the average maturity of Fed purchases. That said, political, economic and health care should fuel flatteners.
In the euro area, the drop in German yields had little impact on sovereign debt spreads. The November spread tightening reflects expectations of QE extension announced by Christine Lagarde. There could be a case a for ‘buy the rumor, sell the news’ pattern around the ECB announcement. Indeed, profit taking around the December 10th ECB meeting could occur although net liquidity added via the upcoming TLTRO-III should limit any spread widening.
The stellar performance of credit markets is paradoxical as fund outflows continue since September. Institutional accounts struggle to invest on maturities within 7 years whilst primary market deals are oversubscribed with new issue premiums close to zero. The scarcity of positive-yielding bonds displaces investor demand onto European high yield, which benefits from low default rates. The European default rate is indeed limited to 1.5% in 2020.

Outflows from credit funds is at odds with increasing volumes hitting equity markets. After an encouraging earnings season, the European stock market rally (+17% on Euro Stoxx 50) is mostly driven by cyclicals hit by the pandemic fallout at the expense of quality stocks. Markets anticipate higher dividend payments over the 2022-2023 horizon.
The rebound in crude oil prices (45$ Brent) favored by the likely postponement of OPEC supply increases spark a sharp outperformance from the oil sector. Consolidation in the European banking sector remains a major investment theme, notably in Spain, but the ECB will be cautious before it authorizes payments to shareholders again. That said, it is worth noting that growth stocks performed slightly better towards the end of last week. 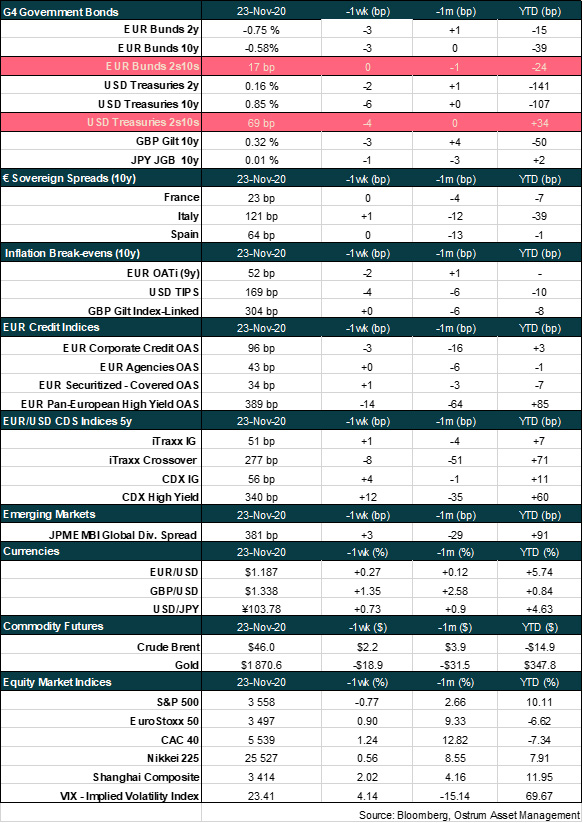