The return of inflation?

The rapid acceleration of money aggregates could put inflation on a higher path over the medium term. This scenario is absolutely not priced nor expected by the markets and could trigger sizeable movements, especially for the curve.

We’re far from it

Return of inflation? The question might sound misplaced, European inflation for almost a decade has clearly been too low compared to ECB’s target at 2%. 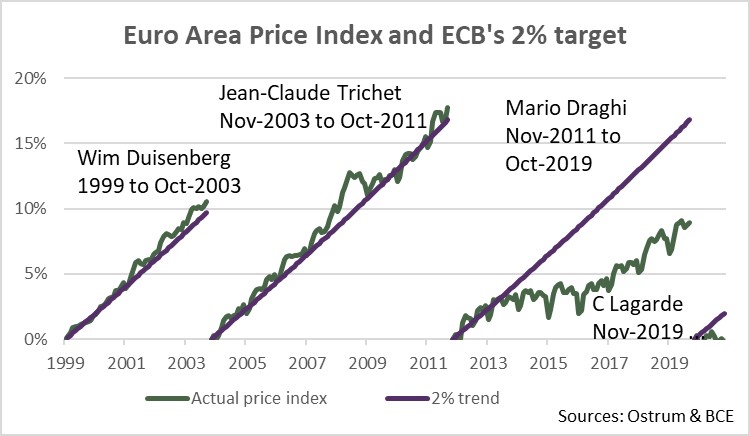 Recent data are not encouraging. The November inflation numbers published last week was a -0,2% while core inflation was at 0,2%, unchanged compared to the previous month which suggests that the collapse in inflation might not be as temporary as previously though. Of course, part of the recent decline owes much to the Covid crisis and is likely to be reverted in the foreseeable future. Inflation would then trend back up, for instance, the energy component was down 8,4% in November but could print a +15 to +20% in Q2 next year if oil prices stay where they are now.

However, a rebound is bound to be most and medium-term inflation prospects remain mediocre at best. The ECB, as well as the Fed, have inflation forecasts that are below their stated objectives. The ECB expects inflation at 1.3% in 2020, too low compared to the 2% target meanwhile the Fed sees inflation barely reaching 2.0% in 2023, again below the target of an inflation that overshoots the 2% mark.

Finally, it is worth underlying that markets think alike with a sobering inflation outlook even though market expectations have been trending steadily up over the past month. 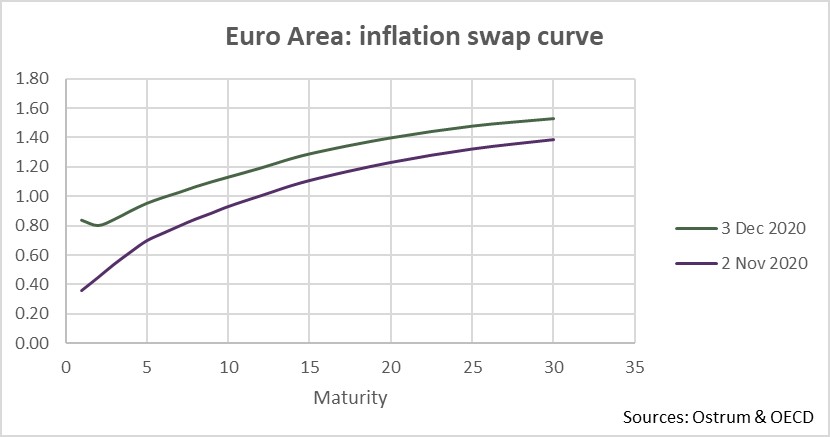 Against those evidences, it seems to us, however, that one should not underestimate the likelihood of a more pronounced inflation trend.

Our argument is daring (or foolish) as it is based on the monetarist theory of inflation which has been abundantly mocked and ridiculed of late. The skyrocketing central bank’s balance sheet appears to be clearly at odds with the stubbornly low inflation prints.

Yet the theory remains empirically accurate: money aggregate growth is consistent with inflation numbers over a long period of time. If we turn our attention to the Euro Zone, the theory would be consistent with an average annual of 1.0% over the past decade while the GDP deflator has gained 1.2% on average over the period. Not bad at all ! Since 2005 (unfortunately the necessary details are not available before that point) the model tells 1.6% while the reality was 1.4%. That’s a level of precision many economists would kill for! 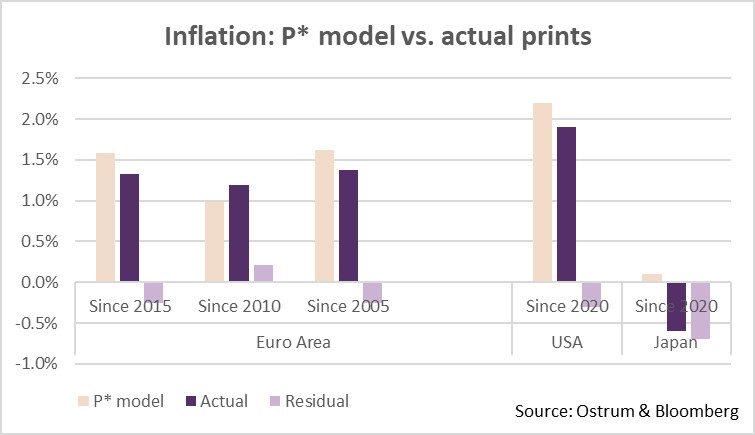 Is that sheer luck? Maybe. It is however important to underline that the model performs equally well in the USA and in Japan. Since 2000, the approach concludes to 2.2% inflation in the USA while the actual print is 1.9%. In Japan the order of magnitude is also reasonable with a +0.1% forecast vs. a -0.6% actual number for inflation, again sicken 2000.

Conclusion : it would not be appropriate to put that approach in the bin. Over a long period, we are talking decades not months, there’s no obvious proof that the link between money creation and inflation has been broken. On the contrary.

A bit of theory

To understand the intuition behind this approach, imagine that the money available in an economy doubles but that production does not change, eventually prices will have to adjust and will double. To be more precise, the below is the canonical equation for this theory:

Nominal production (P is the price level, Y the volume of production) has to equate the monetary base (M) adjusted for the velocity of money (V).

Lately, this theory has been copiously ridiculed. The size of central banks’ balance sheets has ballooned over the past decade or so while inflation, as noted above, has remained very disappointing. As a reminder the Fed’s balance sheet moved from 1 Trillion in 2008 to about 7.1 lately, this is on average a 17% annual increase over the period, over three times faster than the corresponding increase in nominal GDP. On that dimension, the ECB has no reason to be ashamed with a balance sheet size that moved from 1.3 trillion euros to 6.7 trillion, a 421% increase, or 14% per annum. 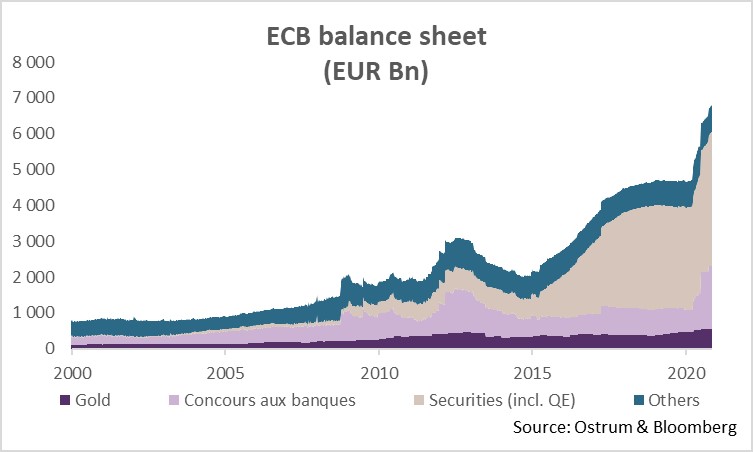 However, what really matters for inflation is not the ECB’s balance sheet size but the volume of liquidity available for transactions. Of course, these two aggregates are linked and tend to move in tandem. However, the proverbial “printing press” is a very misleading image. In modern economies, transaction money is not created by central banks but by commercial banks when they grant credit. This, in economists’ parlance is called “the counterparty of M3”: when a bank grants a loan it will appear on the asset side of its balance sheet and it will credit the current account of the customer. This increases the money aggregates. Part of these liquidities are refinanced at the central bank, hence the usual link between central bank’s balance sheet and M3.

But during the last decade the two aggregates have diverged. Why? The ECB has indeed provided vast amount of liquidity to the banking system but those liquidities, to a very large extent, have been deposited back at the ECB for precautionary reasons but also for regulatory reasons. As a result, M3, which measures transaction liquidities, has been very pedestrian. Those liquidities created by the ECB have been, to use economists’ jargon “sterilized”. 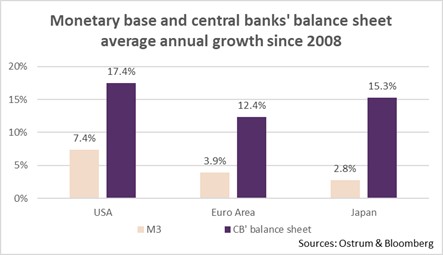 The return of inflation?

The issue is that, while monetary aggregates have been very sluggish over the past decade, they have neatly accelerated since the beginning of this year. Indeed, credit granted by European banks during the pandemic have increased at an unusually rapid pace. This owes much to the state guarantees but also to the extremely loose monetary policy implemented. The consequence has been a sharp acceleration in Europe, as well as in the USA, of monetary aggregates.

This will not lead to a rapid increase in inflation. Monetary mechanisms are slow to feed through and gradual in their effects. Moreover, the output gap remains wide and will help maintain inflationary pressure at bay during the next few quarters as there is absolutely no signs of supply/demand imbalance yet. It is nevertheless reasonable to assume that, over the longer term, the average level of inflation could be higher than what it had been over the last decade or so.

A European inflation that averages more than 2% over the cycle, or even above 3%, seems to become a plausible hypothesis.

Markets are not prepared

That inflation dynamic might seem modest after all. And indeed, this is far from a double-digit 1980s style inflation trajectory. We would argue however that this can be largely enough to trigger significant market rotation.

The issue is that the market is not in line at all with this scenario. It does not believe it at all, even if it is worth noting that markets inflation expectations have trended upwards on both sides of the Atlantic. Inflation swap in Europe are still very low, the 30-year is current at a very pale 1.5% (it was 0.9% in March!). 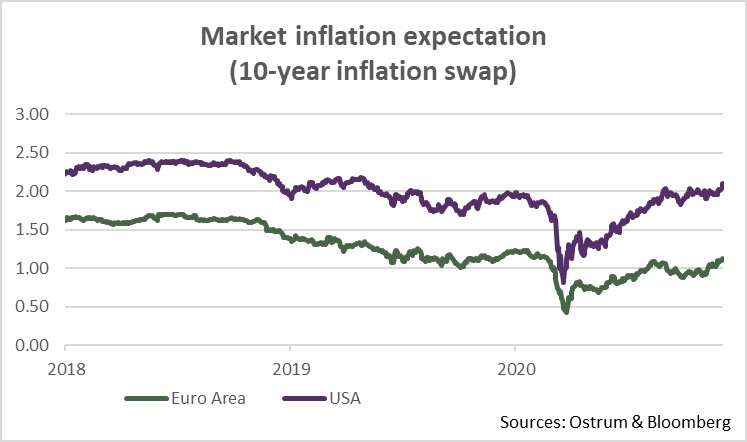 In the chart below we use the inflation swap curve in the Euro Area to estimate the time needed before inflation returns to 2%. Until the middle of last decade the order of magnitude was reasonable, around two to five years. The market expectations move to ten years during the second half of the past decade and is now saying that even on a 30-year horizon, inflation will be comfortably below the 2% mark.
The market does not believe at all in the return of inflation. And it is an issue in terms of the ECB’s credibility. The Fed, by contrast, is in a better place as 1-year swap spreads in four years is currently at 2.06%. The market gives the benefit of the doubt to the Fed with a return of inflation in the not that distant future.

An additional symptom of the market unpreparedness is the reaction of inflationary surprises. The Bund reaction to inflationary surprises has been unusually strong in the recent past. Of course, surprises are currently inconsequential hence the curve moves are also quite limited. But this high sensitivity of the curve suggests that even a moderated inflation scenario, such as the one we introduced above, could result in substantial curve adjustments. 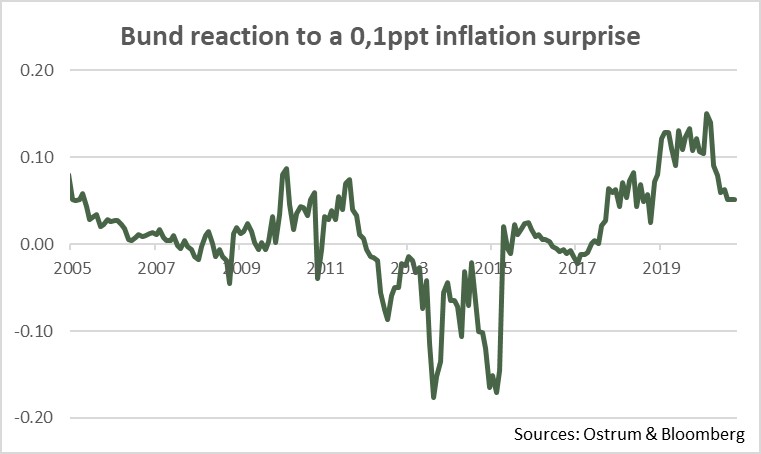 Consequences of the current crisis are far from obvious. If the short-term effects are indisputably deflationary, the reverse might be true over the longer term. The rapid progression of monetary aggregate is one of many elements that could push inflation on a higher path than the one we’ve been accustomed over the past two decades.

However, markets do not believe at all in this scenario. This could lead to hasty repricing. Not only for the curve but also for related asset classes. One can especially think of higher volatility and a rotation in the equity market.