The graph of the week : Strong increase in global energy consumption in 2018

World energy consumption increased sharply in 2018 (+ 2.3%) to grow at a rate almost twice as high as that recorded on average since 2010.

This is revealed by the latest report of the International Energy Agency. This reflects robust global growth and higher heating and cooling requirements in some regions of the world because of unusual temperatures. Despite strong growth in renewable energies (wind and solar), fossil fuels (gas, oil and coal) accounted for nearly 70% of this higher demand. In this way, carbon dioxide emissions increased significantly over the year (+ 1.7%) to reach a new record. These CO2 emissions have increased in China, the United States and India and decreased in Japan and Europe and more particularly in Germany, France and the United Kingdom. 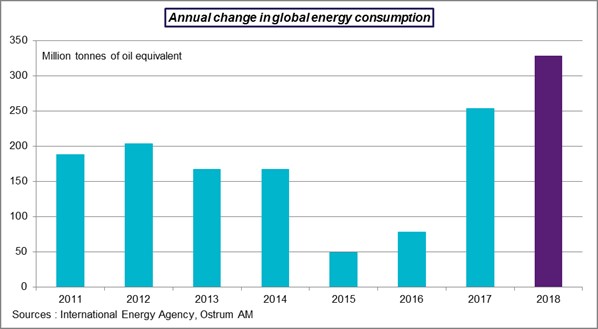